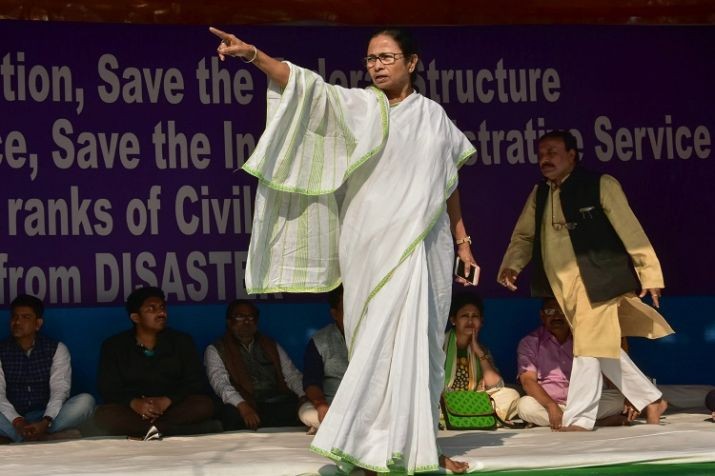 West Bengal chief minister Mamata Banerjee on Tuesday called off her protest in Kolkata against the Central Bureau of Investigation (CBI)’s attempt to question the city’s police chief in connection with ponzi scheme cases, but warned of a larger stir in the national capital next week. “We have decided to hold a dharna on February 13 and 14 in New Delhi,” said Banerjee.

At least 14 parties of the Opposition bloc spoke in favour of Banerjee, who faced criticism by the Centre over what Union ministers called a “constitutional breakdown” in Bengal.

Speaking from the dais on Tuesday, Naidu hit out at Prime Minister Narendra Modi’s government at the Centre. “Democracy is at stake in India under the Modi regime. All of us have to unite to save democracy and the people of the country,” Naidu said.

Tejashwi said, “Modi is using central agencies to harass opposition leaders who are criticising his undemocratic actions and policies.”

Banerjee alleged that Sudipta Sen, the former chairman of the defunct Saradha Group that allegedly defrauded people, had mentioned he was cheated by the BJP’s Himanta Biswa Sarma, who was earlier with the Congress but is now the deputy chief minister of Assam.

“I have enough evidence against the Assam deputy chief minister. I dare Prime Minister Narendra Modi and BJP president Amit Shah to have him arrested,” Banerjee said.

On Twitter, Sarma reacted to Banerjee’s allegations, calling them part of a “frivolous & baseless campaign” against him. “I am not fortunate enough like your Police Commissioner. I’ve joined the investigations and offered my full cooperation as a witness. And all this happened much, much before I joined @BJP4India,” he posted.

During the day, Kumar, who headed a special investigation team that looked into the ponzi case and is accused of destroying evidence, sent a letter to CBI director Rishi Kumar Shukla and offered himself for questioning in Shillong on February 8.

CBI joint director Pankaj Srivastava told a section of the media that CBI would decide the date of questioning.