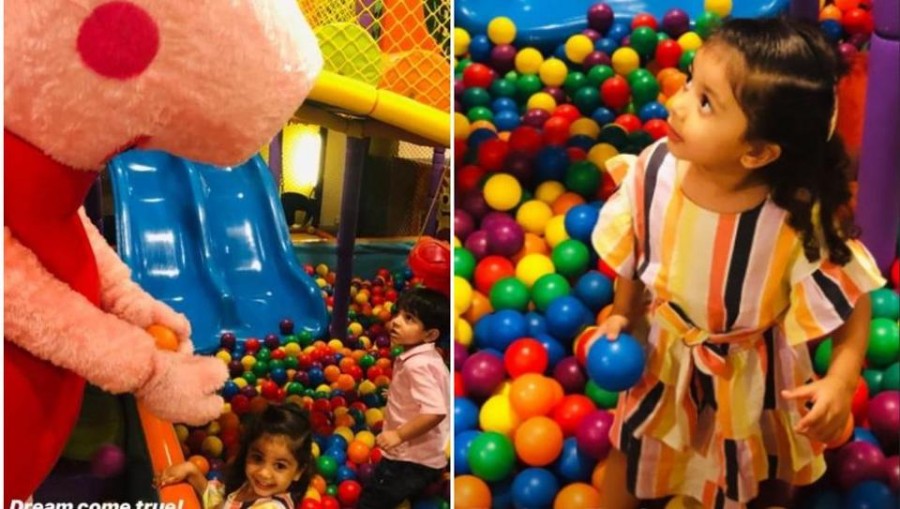 Actor Shahid Kapoor’s wife Mira Rajput is very regular with putting up pictures of her children on social media; over time, she has developed a dedicated fan base too. On Tuesday, she posted fresh pictures of daughter Misha attending a Peppa Pig-themed party.

Sharing them as Instagram stories, Mira wrote: “Dream come true! @nickindiaofficial @hopnbopmumbai @officialpeppa.” In the picture, a happy Misha stands next to a mega-sized cartoon character from Peppa Pig series. Mira had continued, “Thank you Ekta Aunty for a fun Peppa Party @ Ekta Kamra”. In another picture, Misha can be seen sharing a ‘high five’ with George. Sharing it, Mira wrote: ““High five Georgie.” Misha looks blissfully happy in the midst of colourful balls and her favourite Peppa Pig characters.

Sometime back, Mira had shared some pictures of Misha and her son Zain. In one of them, Zain had even pinched his older sister. Sharing them, Mira had written: “Z: “Oh cool can I play with that flower” 2. M: “Ya let me help you hold it” 3. M: “MOM HE JUST PINCHED ME.”

Shahid and Mira are among the most popular Bollywood couples. However, like every other couple, they too have their fights. Shahid has revealed that with him, their fights last a long time. Speaking to Neha Dhupia on her chat show BFFs, where he featured recently in connection to the promotion of his new film Kabir Singh, Shahid said, “I usually get flustered when my wife and I have a fight. It bothers me, and I take time to get over it. It’s once in a couple of months, but when we do fight, but ours lasts a long time, like 15 days. You know it [the tension] is there, and you finally talk it out.”