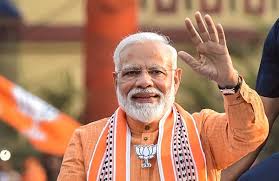 Pollsters on Sunday predicted a saffron surge in the Lok Sabha elections, with exit polls suggesting a re-run of the 2014 verdict.

The poll of polls — an average of all exit polls — suggested the BJP would retain its humongous gains in the central and western parts of the country, while making deep inroads in the East, including West Bengal and Odisha.

The South, except Karnataka and Goa, is where the Congress-led alliance would gain significantly.

While the prediction of Lok Sabha seats in Andhra Pradesh was mixed, pollsters were unanimous in indicating the onward march of the K Chandrashekar Rao-led Telangana Rashtra Samiti (TRS) in Telangana.

The poll of polls also suggested that the ruling NDA wouldn’t require the support of new allies, since all of them except ABP-Nielson (267) and Neta-News X (242), gave it easy majority.

In all, 542 of 543 seats went to polls — election in Tamil Nadu’s Vellore seat was rescinded following allegations of voter inducement. The final outcome would be known on May 23, when all the votes are counted.

If exit polls are anything to go by, the BJP would repeat its 2014 performance in Gujarat, Rajasthan, Madhya Pradesh and Chhattisgarh, winning over 90 per cent of the seats. They also predicted a saffron sweep in Himachal Pradesh and Uttarakhand.

While the Congress is projected to make big gains in Punjab, apparently because of the possible rout of the Aam Admi Party (AAP), the BJP is expected to sweep Haryana.

Bihar, too, is projected to go the NDA way. In Uttar Pradesh, the BJP’s position would surely dip as compared to 2014, but the seat count would be credible, according to most exit polls.

Delhi too was added to the BJP sweep list by most exit polls, with some predicting the AAP may draw a blank.

Some of the exit polls put the NDA’s vote share at over 40 per cent, with one of them giving 49 per cent to the ruling alliance, which had garnered close to 39 per cent votes in 2014.

Exuberant BJP MP Anurag Thakur tweeted: “I think the Congress is looking for a way out where they can blame someone else for their defeat.”

National Conference leader and former chief minister of Jammu and Kashmir Omar Abdullah quipped: “Every single exit poll can’t be wrong! Time to switch off the TV, log out of social media & wait to see if the world is still spinning on its axis on the 23rd.”

West Bengal Chief Minister and Trinamool chief Mamata Banerjee tweeted: “I don’t trust Exit Poll gossip. The game plan is to manipulate or replace thousands of EVMs through this gossip. I appeal to all Opposition parties to be united, strong and bold. We will fight this battle together.”

Congress spokesperson Sanjay Jha called the exit polls ridiculous and claimed the silent voters will be kind to his party on May 23.