Entertainment / Movies in March to Release : Luka Chuppi, Badla, Kesari and others 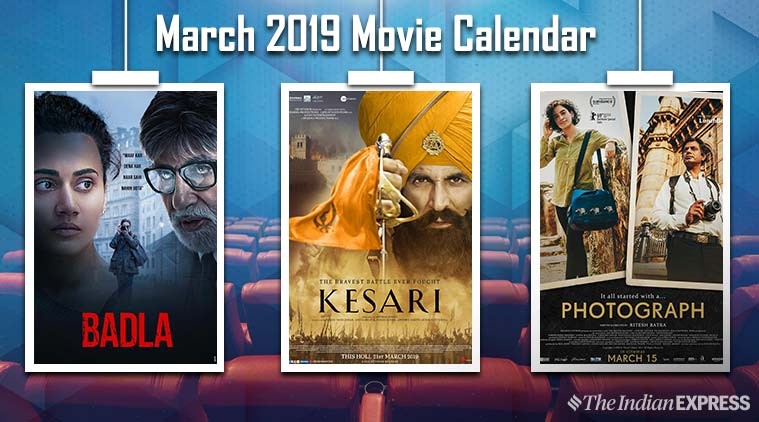 The films which are making noise among cinephiles are Nawazuddin Siddiqui & Sanya Malhotra's unusual tale of love, Photograph and Akshay Kumar's historical drama, Kesari. All set to present another film, Luka Chuppi, this March. Also, filmmaker Abhishek Chaubey, who has films like Udta Punjab & Ishqiya to his credit, is releasing his next, Sonchiriya, a dacoit drama in March. All movie buffs who have a liking genres.

Kartik Aaryan and Kriti Sanon will be seen together on the silver screen for the first time in Laxman Utekar directorial Luka Chuppi. The romantic comedy has a live-in relationship at its core and is backed by talented actors like Vinay Pathak, Pankaj Tripathi and Aparshakti Khurrana. If you are a fan of Bollywood romantic dramas and like its song and dance culture, then Luka Chuppi is the one for you.

After a very long time, Bollywood has a dacoit-drama in the offering. Filmmaker Abhishek Chaubey presents the story of the bandits of Chambal in Sonchiriya. Sushant Singh Rajput, Bhumi Pednekar, Manoj Bajpayee, Ashutosh Rana and Ranvir Shorey star in Sonchiriya, and it’s their rustic avatars in the trailer of the film which has created a lot of buzz.

Taapsee Pannu and Amitabh Bachchan reunite for Sujoy Ghosh’s whodunnit drama Badla. The film is an official remake of the Spanish hit The Invisible Guest (2016). Its trailer has piqued the interest of the audience as it left them with a lot of questions which will be answered only when the film comes out on March 8. Produced by Shah Rukh Khan’s Red Chillies Entertainment, the thriller also stars Manav Kaul and Amrita Singh.Ritesh Batra directorial Photograph, toplined by talents like Nawazuddin Siddiqui and Sanya Malhotra, has already proved its mettle at Sundance Film Festival and Berlin Film Festival. This unusual tale of love has Siddiqui playing the role of a photographer Rafi who introduces Miloni (Sanya Malhotra), as his lover Noori to his grandmother. But if they are actually in love will be known when the film will hit the theaters on March 15.