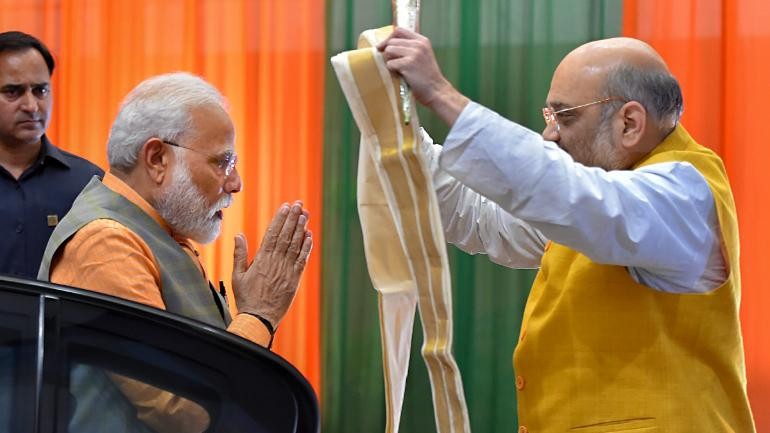 Exactly five years ago, the Narendra Modi phenomenon had stunned many poll pundits by propelling the BJP to power at the Centre with the biggest single-party mandate in 30 years. The Congress, leading the UPA government for 10 years, was routed and reduced to its lowest ever tally of 44 in the Lok Sabha.

The BJP had won 282 seats in the Lok Sabha with a strike of almost 66 per cent. The party had fielded its candidates in 428 Lok Sabha constituencies.

The opponents played down the victory of the BJP in 2014 Lok Sabha election arguing that the party got only 31 per cent votes indicating that 69 per cent Indians were not in favour of the Modi government. But the argument seemed misplaced.

No party had won 30 per cent vote on its own in any election since 1991 to form a government. Two examples can be considered from Uttar Pradesh (the most populous state) assembly elections.

The BSP won a clear majority in 2007 UP polls with only 30 per cent votes and the SP got a similar mandate in 2012 with 29 per cent vote share. It was surpassed in 2017, when the BJP won 39.7 per cent votes to win biggest mandate in 40 years in Uttar Pradesh. However, the BJP had suffered a loss in the state polls. It had got 42.7 per cent votes in UP during the 2014 Lok Sabha polls.

The Congress-led UPA came to power in 2004 on the back of an election verdict that was dictated by a rural distress which the BJP-led NDA government of Atal Bihari Vajpayee had failed to identify and address.

The economy was on the upswing and the Manmohan Singh government introduced a series of public welfare schemes including right to work (MNREGA), right to education and offered massive farm loan waiver just before the 2009 Lok Sabha polls.

However, following the global meltdown and rise of activism in the Congress leadership (virtually under control of then party vice-president Rahul Gandhi) led to a "policy paralysis".

The economy had stagnated. Inflation was rising, jobs were drying up in the private sector, GDP growth rate was falling and experts had started saying that India's growth story was over. The political ground was ready for a change.

By the time of election, development had become the battle cry and the Gujarat model of economic growth under Narendra Modi's chief ministership was being viewed as the answer to India's economic woes.

Corruption was a major anti-incumbency issue for the UPA government going into the 2014 Lok Sabha election. The government was battling to ward off the stain left by the Commonwealth Games scam, the 2G spectrum scam, the coal scam, VVIP chopper scam, Adarsh scam and cash-for-vote scam among others.

An anti-graft campaign led by NGO India Against Corruption organised itself under veteran Gandhian Anna Hazare and mobilised the masses across the country for Lokpal, an ombudsman. RTI and civil-rights activists formed the main body of the anti-graft campaign which created a public sentiment against the already battered UPA government.

On the other hand, the Rashtriya Swayamsevak Sangh and the BJP used the anti-graft environment to present Narendra Modi, the longest-serving chief minister of Gujarat, as a goal-oriented non-corruptible leader. The back-to-back scams under Manmohan Singh painted him as a weak leader who was being "remote controlled" by the Congress leadership of Sonia Gandhi and Rahul Gandhi. Modi came up with the image of a strong leader. The voters welcomed him with open arms.

When Modi launched his campaign for the 2014 Lok Sabha election, he launched a frontal attack on the Congress accusing it of "insulting" the pride of Indian youth by offering doles in the form of MNREGA.

He spoke in his election rallies about turning the huge population into an asset by empowering the youth with employable skill set and infusing the sense of entrepreneurship. At the time of 2014 election, half of the 81 crore voters were under the age of 35.

Modi's speech and the promises made by him caught the imagination of the youth and fired their aspiration. The young voters came out in large numbers to vote for Modi, not necessarily the BJP.

Rise of the Right

Since its inception in 1980, the BJP has made "appeasement of Muslims by the Congress" one of its poll planks. The campaign has been consistent. The allegation by the BJP got currency from remarks made by Manmohan Singh during a meeting of the National Development Council in 2006.

He had said, "We will have to devise innovative plans to ensure that minorities, particularly the Muslims are empowered to share equitably the fruits of development. They should have the first claim on resources."

The BJP used the statement to up the ante against the Congress on the issue of appeasement of Muslims. With economy slacking and jobs drying up, the sustained campaign saw a new constituency of the Right in the run up to the 2014 Lok Sabha election.

Around 45,000 shakhas (branches) of the Rashtriya Swayamsevak Sangh (RSS) too contributed to the rise of new wave of right-wing supporters. This gelled perfectly with Narendra Modi's image built in Gujarat, where he was seen as a strong Hindutva leader. A video clip showing Modi refusing to wear a skull cap at an event in Gujarat served as a proof of his strong Hindutva credentials.

By the end of Manmohan Singh's second tenure in the Prime Minister's Office, the BJP had settled the issue of succession of party leadership. Veteran parliamentarian and the original Hindutva poster boy of the party, LK Advani was told to take a backseat and Modi emerged as the supreme leader in the BJP. His close confidant Amit Shah had been given the charge of Uttar Pradesh, where the BJP had not done well since losing power in mid-1990s.

Professionals were hired to manage Modi's election campaign, in which latest information technology was put to effective use. The BJP provided live feed of all the rallies that Modi addressed making it easier for telecast through various news channels.

The BJP cadres were galvanised to show energy in his rallies, which would reverberate with the chants of "Modi-Modi". Such electioneering was not seen in the country and it electrified the booth-level workers of the party. At the same time, it also made the Congress and other parties nervous. These parties looked confused and lost the electoral battle even before the actual fight began.

The impression that Manmohan Singh was a "weak" leader created space for a strong leader. Modi offered to fill the gap. Meanwhile, on January 8 in 2014, Pakistan Army's border action team infiltrated into the Indian side and killed two soldiers in Poonch area of Jammu and Kashmir.

The body of one of the jawans was mutilated leading to a huge uproar with BJP leader Sushma Swaraj daring the UPA government to "bring 10 heads" from the other side.

The same month at a public rally in Uttar Pradesh, Modi made "56-inch chest" remark. However, his remark came in reference to converting a backward state like Uttar Pradesh into Gujarat, an industrially developed state. But the "56-inch chest" comment became synonymous with "strong leadership" that Modi offered to provide if the BJP was elected to power in the Lok Sabha election.

And, it happened. The 2014 Lok Sabha election was held in nine phases between April 7 and May 12. The results were announced on May 16. Narendra Modi took oath as the prime minister on May 26.