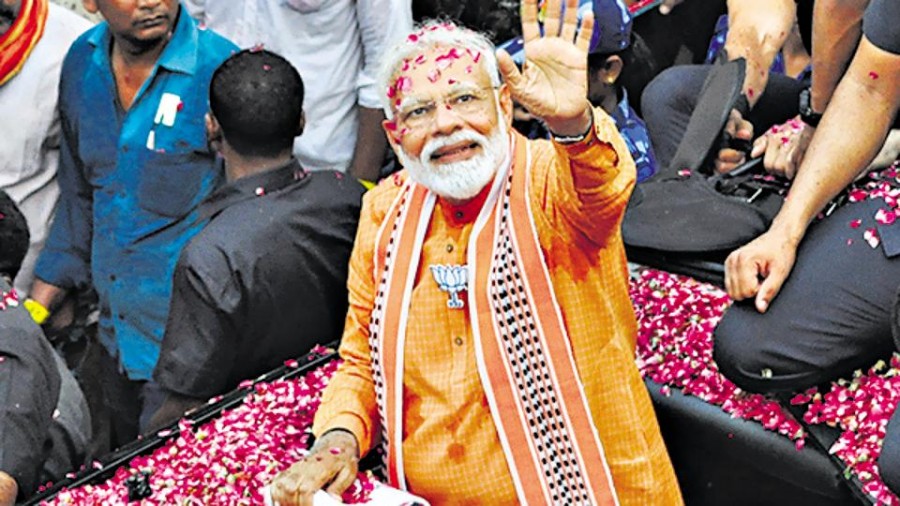 Prime Minister-elect Narendra Modi will be sworn in on Thursday for his second term at the helm of a coalition government that will be minus outgoing finance minister Arun Jaitley, in a ceremony attended by 6,000 invitees, including foreign dignitaries, allies and adversaries.

Efforts towards government formation were in full swing with Modi and Bharatiya Janata Party (BJP) president Amit Shah holding a three-hour meeting on Wednesday after four hours of discussions the previous day on the allocation of cabinet positions.

United Progressive Alliance (UPA) chairperson Sonia Gandhi, her son and Congress president Rahul Gandhi and former prime minister Manmohan Singh will be in attendance at the 7pm swearing-in ceremony on the forecourt of Rashtrapati Bhavan, where Modi and his cabinet colleagues will be administered the oaths of office and secrecy by President Ram Nath Kovind.

The Congress confirmed that Sonia Gandhi, Rahul Gandhi and Manmohan Singh will be present, but in a volte-face, West Bengal chief minister and Trinamool Congress chief Mamata Banerjee decided on Wednesday to skip the swearing-in, citing the BJP’s decision to invite relatives of 54 of its activists the ruling party says have died in political violence in West Bengal. Banerjee said there has been no political violence in the state.

Jaitley, meanwhile, ruled himself out of the new cabinet, citing health issues, but said he would be available to carry out any task to support the government and the BJP informally. “During the last 18 months, I have had some serious health challenges,” Jaitley, 66, wrote in an open letter to Modi. “I am writing to you to formally request you that I should be allowed a reasonable time for myself, my treatment and my health and, therefore, not be a part of any responsibility, for the present, in the new government.”

The meeting between Modi and Shah was followed by one between the latter and Bihar chief minister Nitish Kumar, whose Janata Dal (United), with 16 seats, is the third largest partner in the National Democratic Alliance (NDA). JD (U) was not part of the previous government, but is expected to be this time. “I am here for a meeting with party office bearers. It is a normal meeting,” Kumar said. Outgoing home minister Rajnath Singh also met Modi.

The new council of ministers is expected to retain most veterans, other than Jaitley. Railways minister Piyush Goyal handled the finance portfolio in the last government when Jaitley was undergoing medical treatment, but speculation is also rife about Shah possibly moving to North Block if Modi decides to induct him in the government.

Tamil Nadu’s information and publicity minister Kadambur C Raju said there was a chance of the All India Anna Dravida Munnetra Kazhagam (AIADMK) getting a berth in the Modi government. The BJP had an alliance with the AIADMK in the Lok Sabha polls, but the latter could win just one of the 38 seats that were contested.

Leaders of the Bay of Bengal Initiative for Multi-Sectoral Technical and Economic Cooperation, or BIMSTEC, will be present at the swearing-in together with the Prime Minister of Mauritius and President of Kyrgystan. BIMSTEC member-states are Bangladesh, India, Myanmar, Sri Lanka, Thailand , Nepal and Bhutan.

Several overseas friends of BJP from 15 countries, including the US, Australia, Germany and the UK, have been invited, along with prominent opposition leaders and chief ministers.

Mamata Banerjee ,who on Tuesday agreed to attend the event, did a U-Turn on Wednesday, accusing the BJP of trying to score political points by inviting the relatives of BJP activists who allegedly fell victim to violence in West Bengal

“It was my plan to accept the ‘Constitutional invitation’ and attend the oath-taking ceremony. However, in the last one hour, I am seeing media reports that the BJP are claiming 54 people have been murdered in political violence in Bengal. This is completely untrue. There have been no political murders in Bengal. These deaths may have occurred due to personal enmity, family quarrels and other disputes; nothing related to politics. There is no such record with us,” Banerjee tweeted.

“The ceremony is an august occasion to celebrate democracy, not one that should be devalued by any political party which uses it as an opportunity to score political points. Please excuse me,” she added in the message that began by congratulating the prime minister-elect.

Her decision stretches the bitterness of the hard-fought electoral campaign in West Bengal to the inauguration of the new cabinet. The BJP made deep inroads into West Bengal in the just concluded general elections by winning 18 of the state’s 42 Lok Sabha seats, lowering the strength of Banerjee’s Trinamool Congress (TMC) in the House from 34 to 22.

Interestingly, outgoing chief minister Buddhadeb Bhattacharjee of the Left Front attended Banerjee’s swearing-in on May 20, 2011, despite the TMC inviting members of several families who were killed during the anti land-acquisition movements in Bengal’s Singur and Nandigram in 2006 and 2007 that she spearheaded. Banerjee in 2011 ended the Left’s 34-year rule in Bengal.

“Mamata Banerjee is an unpredictable politician. There is no explanation why she said yesterday that she would attend, and why she withdrew today. Our leaders were rational and they attended her swearing-in ceremony,” said Left legislator Sujan Chakraborty.

Modi will start the day by visiting Rajghat in the morning to pay tribute to Mahatma Gandhi.

Thursday’s swearing-in ceremony will be followed by a high tea on the forecourt of Rashtrapati Bhavan, the largest Presidential estate after Turkey’s Cumhurbaşkanlığı Külliyesi, to be attended by 6,000 invitees and a dinner to be hosted by President Kovind for around 40 people.

Non-scheduled flights will not be allowed to take off or land between 4pm and 11pm on Thursday at Delhi’s Indira Gandhi International Airport. The Airports Authority of India on Wednesday issued a NOTAM (notice to airmen) stating that Delhi airspace (within a 300 km radius of Delhi) will remain closed between 4pm and 11pm. Non-scheduled flights transiting through India will not be allowed to use Delhi airspace during the period. Commercial flights will not be affected.

Delhi Traffic Police, meanwhile, issued a traffic advisory, saying several roads in New Delhi district will be closed for the movement of traffic between 4pm and 9pm on Thursday and asked motorists to avoid them.