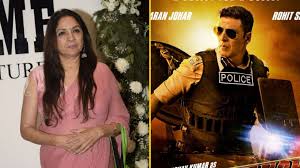 Rohit Shetty’s upcoming blockbuster Sooryavanshi goes on floors on May. Word is the film’s leads Akshay Kumar and Katrina Kaif will be joined by the newest cast member, Neena Gupta, on the first day.

According to a report by Mumbai Mirror, the Badhaai Ho actor will play Akshay’s mother in the cop drama. But don’t expect Neena to do her best impression of Farida Jalal or Nirupa Roy.

Akshay Kumar will play the role of an ATS officer in Sooryavanshi. His character was first hinted at in a cameo at the end of Shetty’s 2018 film Simmba, which starred Ranveer Singh.

The film is backed by Reliance Entertainment, Dharma Productions and Cape of Good Hope Films. It is set to release on Eid 2020.