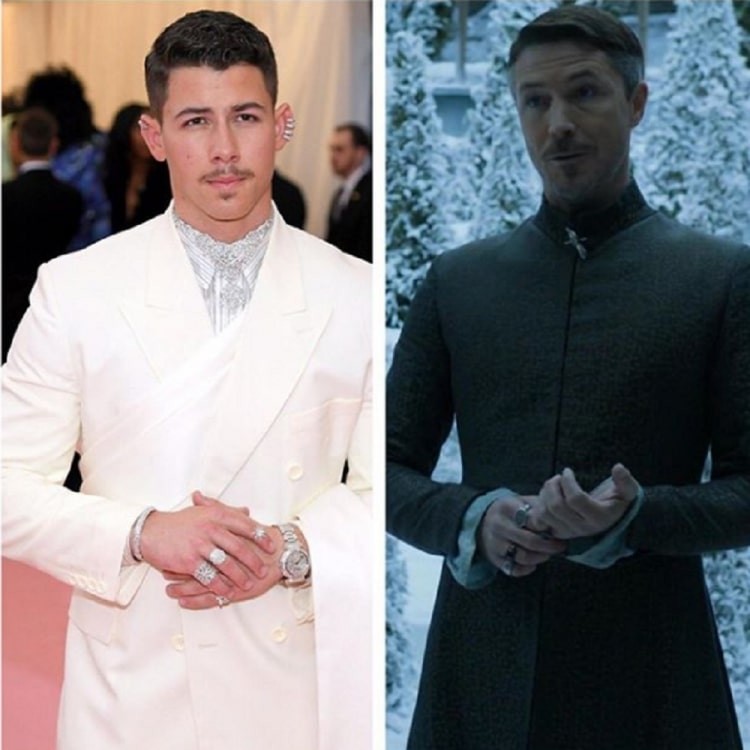 The MET Gala 2019 is finally here and is taking place at the Metropolitan Museum of Art's Costume Institute, New York. It is one of the most fashionable and glamorous events of the year, MET Gala, also known as Costume Institute Gala. While many of the famous personalities from the world are attending this annual fundraising event, several Bollywood actresses too have flown to NYC for the festival. The theme of this year's MET Gala is Camp: Notes on Fashion.

Nick Jonas and Priyanka Chopra Jonas were also on their top game as they made their entry at the event. Nick looked dapper in a white Dior suit and finished his look with a few earrings and rings. In fact, he took to his Instagram handle and shared a collage with his look from the event and a picture if Lord Peter Baelish aka Littlefinger from Game of Thrones. The resemblance is surely uncanny. Nick's sister-in-law Sophie Turner plays the role of Sansa Stark, so he captioned his post as, "Sansa...we must protect the Vale..#metgala #littlefinger."

The star-studded event is being hosted by Lady Gaga and Serena Williams. It saw many personalities on top of their fashion game. Many others who were present there included Deepika Padukone, Kim Kardashian West, Kanye West, Kendall and Kylie Jenner, Miley Cyrus, Shawn Mendes, Kacey Musgraves, Zendaya, Lupita Nyongo, Rihanna, Cardi B, Hailey Bieber and Bill Porter.