Lok Sabha / No democracy in West Bengal for more than a year: PM Modi 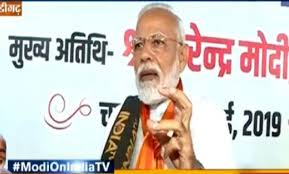 PM Modi also questioned the media and said that it suppressed the violence that took place in the West Bengal.

"The opposition is disappointed because they could not form a grand alliance and set an agenda," said the PM.

PM Modi further teared into the opposition and said their only businesses are spreading lies and criticising him.

PM Modi also expressed gratitude towards voters for coming out in large number during the past six phases.

Polling in the last phase will take place on 19 May.

The general election is currently being held in seven phases from 11 April to 19 May 2019 to constitute the 17th Lok Sabha. The counting of votes will be conducted on 23 May, and on the same day the results will be declared.

Legislative Assembly elections in the states of Andhra Pradesh, Arunachal Pradesh, Odisha and Sikkim are being held simultaneously with the general election. Prime Minister Narendra Modi on Tuesday slammed Mamata Banerjee government in West Bengal and said from last one year there is no democracy in the state.

"From the last one year, there is no democracy in West Bengal. Sensing defeat, TMC leaders are freaking out. They didn't allow Amit Shah's rally to take place in West Bengal, his chopper to land," PM Narendra Modi said in an exclusive interview to India Tv.