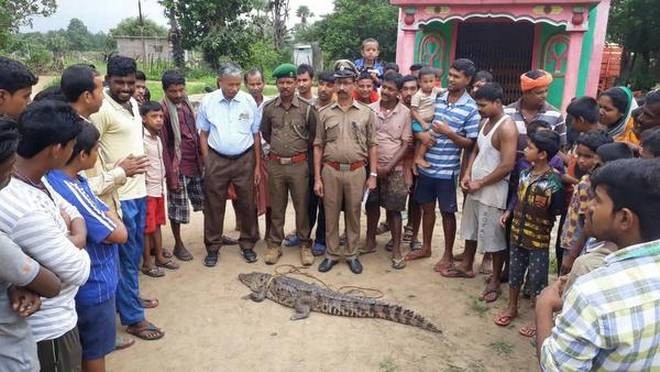 Villagers on Sunday rescued a nine-foot female crocodile, retrieved 59 eggs and handed them over to the Forest department in Odisha’s Kendrapara district, a region where man-crocodile conflicts often hog headlines.

Residents of Arada village, on the bank of river Gobari, stumbled upon the crocodile protecting dozens of eggs, when they came out for daily chores early in the morning.

Back in safe waters

“Usually, crocodiles are violent while laying eggs. They attack anyone coming closer. Villagers, however, mustered courage and captured the reptile using a fishing net. Subsequently they informed us,” said Bijay Kumar Parida, Assistant Conservator of Forests, Mahakalapada. Mr. Parida said the eggs were sent to crocodile research centre in the Bhitarkanika National Park. The crocodile was later released into the Kharnasi water channel in Mahakalapada forest range. Creeks and rivers inside Bhitarkanika are one of the largest natural abodes of crocodiles in the country.

Conservation of salt-water crocodiles began in Bhitarkanika on the Odisha coast in 1975 when their number began to dwindle. Only three to four nests were sighted in the area and the population of salt-water crocodiles then was estimated to be just 95. Now, it has increased to 1,700. Last year, the Forest and Environment department had come across 101 crocodile nests in the Bhitarkanika National Park. In 2017, field staff of the park had sighted 80 crocodile nests which had gradually grown from 70 in 2015 to 75 in 2016.