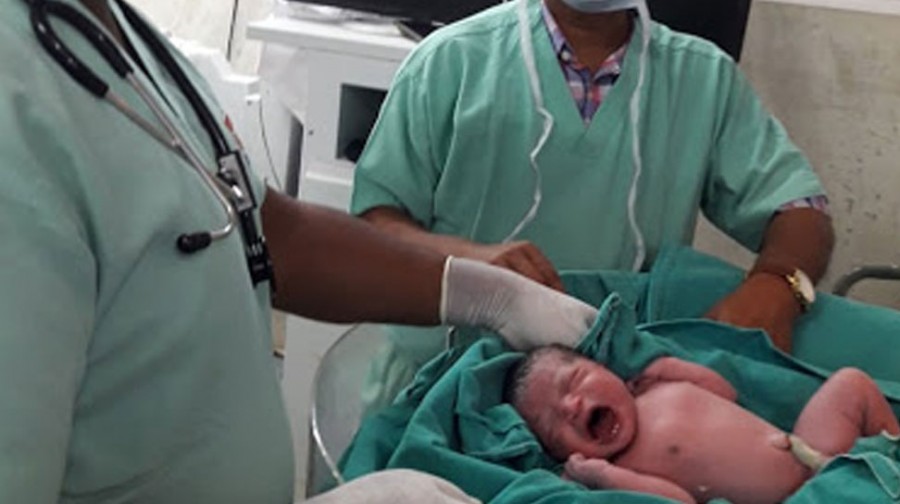 A baby was born in a hospital in Mancheswar in Odisha's Bhubaneswar as severe cyclonic storm Fani made landfall in the coastal areas near Puri on Friday.

Dr Arundhati Senapati, the Medical Director, informed that a 32-year-old woman gave birth to a baby girl in the Railway Hospital today at 11:03 AM.''''The baby has been named after the cyclonic storm, Fani. Both the mother and the new-born baby girl are doing fine,'' Senapati said.

The 32-year-old woman, who delivered the newborn child, is a railway employee, working as a helper at Coach Repair Workshop in Mancheswar. The baby was born at a time when Cyclonic storm 'Fani' slammed into the Odisha coast on Friday morning, uprooting trees and sweeping away thatched huts, as large areas of the seaside pilgrim town of Puri were left submerged. The extremely severe cyclonic storm made landfall at around 8 AM in Puri but thanks to enough advance warning, about 11 lakh people had already been evacuated from vulnerable and low-lying areas of at least 11 coastal districts by Thursday.

"It will take around three hours for the entire landfall process to be completed" by 11 AM, Director of Regional Meteorological Centre in Bhubaneswar, HR Biswas, said.

The cyclonic system, whose eye is around 28 km wide, is moving at around 30 kmph, Biswas said. But within the system, the winds are reaching speeds of up to 175 kilometers per hour that may go up to 200 kmph, leaving in their wake uprooted trees and thatched structures, including in the state capital Bhubaneswar.

He said the nearly 11 lakh people evacuated earlier from about 10,000 villages and 52 urban areas have been accommodated in over 4,000 shelters, including 880 specially designed cyclone centres.

Arrangements have been made to start free kitchens at the cyclone shelters. Around 4,000 such shelters, including 880 specially designed cyclone centres, are housing the evacuees.

Over one lakh dry food packets have been kept ready for air dropping for which two choppers requisitioned, Sethi said.The Indian Navy has also deployed three ships with relief material and medical teams so that it can launch rescue operation after the cyclone hits the coastline of Odisha.

"Helicopters are also kept standby for joining in the rescue operation and for air dropping of relief material when required," Capt Sharma said.

The Department of Telecommunication has issued orders to all operators to allow free SMS for cyclone-related messages and inter-operability of mobile networks by other operators. The Petroleum Ministry has ensured the availability of sufficient petroleum and oil in the affected areas.

The Central government has also made preparations.

The Power Ministry has made arrangements to restore power supply in affected areas with the least downtime. The Drinking Water and Sanitation Ministry plans to move additional water supplies in the affected areas and is keeping in readiness packaged drinking water.