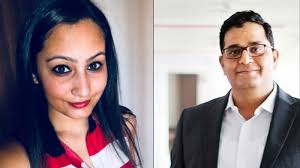 In a brief statement on Thursday, 28 March, Paytm said that former executive Sonia Dhawan, who was jailed for allegedly trying to extort money from founder Vijay Shekhar Sharma, is not rejoining the organisation until ongoing proceedings are not over, the company said in a statement.

This comes a day after the daily had reported that Dhawan might be rejoining as she was spotted in the office premises over the course of the week.

The report further said that the statement from the company has come after investors had questioned Dhawan’s presence in the offices.

Sonia Dhawan, who was jailed for allegedly being an accomplice in an extortion bid against Paytm founder Vijay Shekhar Sharma, was earlier reported to be back on the company’s roster.

A Moneycontrol report, quoting sources, had said that Dhawan, who spent nearly five months in jail with husband Rupak Jain, was “reintroduced to senior executives” of Paytm. The report said that she was reinstated as the Vice President of Corporate Communications/Public Relations.

Meanwhile, The Economic Times had also reported the development, saying that she has already rejoined “earlier this week”.