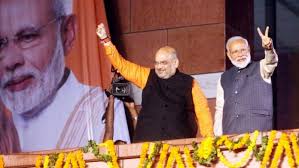 Bharatiya Janata Party (BJP) president Amit Shah on Tuesday met Prime Minister-elect Narendra Modi as the party and the government firmed up preparations for the swearing-in ceremony on Thursday evening.

There was no official word on about what transpired at the four-hour-long meeting, but a BJP leader said the meeting was significant as names for ministerial berths in the new government were being finalised.

The ministers, who are likely to be sworn in along with Modi, are likely to start receiving calls from Modi directly from Wednesday evening, according to people aware of the developments who asked not to be named.

All chief ministers have been invited for the swearing-in ceremony at the Rashtrapati Bhawan, which will be held between 7pm and 8:30pm. Invitations were being sent to prominent opposition leaders as well, the people added.

There has been much speculation about the possible induction of Shah into the new Modi cabinet. Shah won his first Lok Sabha election from Gandhinagar in Gujarat with a margin of over 5.57 lakh votes. According to the BJP constitution, Shah can have a third three-year term as the party chief.

The BJP follows “one man, one post” policy. If Shah joins the government, he will have to quit the organisational post. In that case, J P Nadda is likely to replace Shah, according to the people cited above.

Nadda, who was the health minister in the previous government, is a former leader of the Akhil Bharatiya Vidyarthi Parishad, the student’s wing of BJP’s ideological fountainhead, Rashtriya Swaymsevak Sangh.

He has served as BJP’s national general secretary and is also a member of the party’s highest decision-making body, the parliamentary board.

In Kolkata, West Bengal chief minister and Trinamool Congress (TMC) chief Mamata Banerjee said she will attend the swearing-in ceremony. “We will attend the programme. There are certain ceremonial programmes where attending amounts to Constitutional courtesy. But there is only one day in between. We will try to attend,” Banerjee said.

Banerjee’s confirmation coincided with the defection of two legislators, 56 municipal councillors and three rural body representatives from the TMC to BJP on Tuesday.

Chief ministers of Congress-ruled Karnataka, Madhya Pradesh, Punjab, Chhattisgarh, and Rajasthan have received invitations but were yet to decide if they will attend or not.

According to an official in the Delhi government, chief minister Arvind Kejriwal too will attend the swearing-in ceremony.

News agency Press Trust of India quoted unnamed sources and reported that Congress President Rahul Gandhi was among the opposition leaders being invited for Modi’s inauguration. Invitations were being sent to all the major regional and national political parties, it reported.

The government separately released a statement saying several foreign nations had confirmed that their leaders and representatives will attend the ceremony.