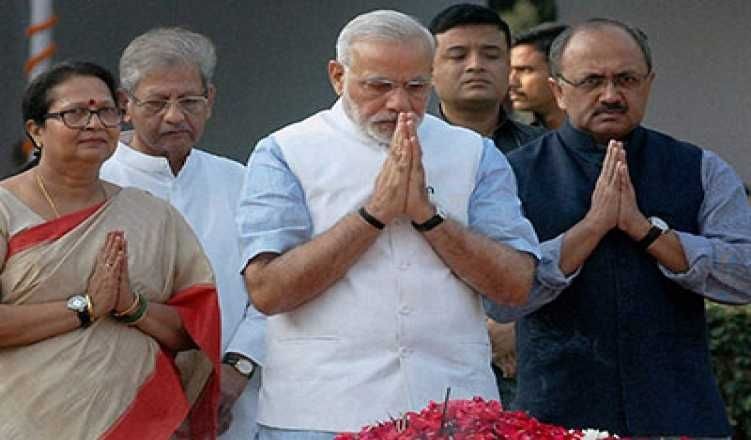 Before Prime Minister-elect Narendra Modi takes oath for his second time on Thursday evening, he began his day by paying his respects to Mahatma Gandhi, late Atal Bihari Vajpayee and soldiers killed in the line of duty.

The Mahatma’s memorial, Rajghat, was the first stop on Modi’s itinerary as senior Bharatiya Janata Party leaders, including party president Amit Shah, JP Nadda, Piyush Goyal and Giriraj Singh also accompanied him. Dressed in white kurta and churidar, Modi bowed down with flower petals in his hands as he prayed at the memorial to India’s greatest icon from the freedom movement.

The next monument he visited was the National War Memorial near India Gate, which is dedicated to soldiers killed in the service of the country, as snipers kept watch from high-rises along his route. Indian Army chief General Bipin Rawat, Indian Navy chief Admiral Sunil Lanba and vice-chief of the Indian Air Force Air Marshal RKS Bhadauria were also present.

Modi will be sworn-in in a ceremony attended by 6,000 invitees, including foreign dignitaries, allies and adversaries.

According to news agency PTI, more than 10,000 security personnel of Delhi Police and paramilitary forces have been deployed for the swearing-in ceremony and over 2,000 others will secure the route meant to be taken by PM Modi and foreign dignitaries.

United Progressive Alliance (UPA) chairperson Sonia Gandhi, her son and Congress president Rahul Gandhi and former prime minister Manmohan Singh will be in attendance at the 7pm swearing-in ceremony on the forecourt of Rashtrapati Bhavan, where Modi and his cabinet colleagues will be administered the oaths of office and secrecy by President Ram Nath Kovind.

Leaders of the Bay of Bengal Initiative for Multi-Sectoral Technical and Economic Cooperation, or BIMSTEC, will be present at the swearing-in together with the Prime Minister of Mauritius and President of Kyrgyzstan. BIMSTEC member-states are Bangladesh, India, Myanmar, Sri Lanka, Thailand, Nepal and Bhutan.

Several overseas friends of the BJP from 15 countries, including the US, Australia, Germany and the UK, have been invited, along with prominent opposition leaders and chief ministers.

Mamata Banerjee, who on Tuesday agreed to attend the event, did a U-Turn on Wednesday, accusing the BJP of trying to score political points by inviting the relatives of BJP activists who allegedly fell victim to violence in West Bengal.

Thursday’s swearing-in ceremony will be followed by a high tea on the forecourt of Rashtrapati Bhavan to be attended by 6,000 invitees and a dinner to be hosted by President Kovind for around 40 people.

Non-scheduled flights will not be allowed to take off or land between 4pm and 11pm on Thursday at Delhi’s Indira Gandhi International Airport. The Airports Authority of India on Wednesday issued a NOTAM (notice to airmen) stating that Delhi airspace (within a 300 km radius of Delhi) will remain closed between 4pm and 11pm. Non-scheduled flights transiting through India will not be allowed to use Delhi airspace during the period. Commercial flights will not be affected.

Delhi Traffic Police, meanwhile, issued a traffic advisory, saying several roads in New Delhi district will be closed for the movement of traffic between 4pm and 9pm on Thursday and asked motorists to avoid them.