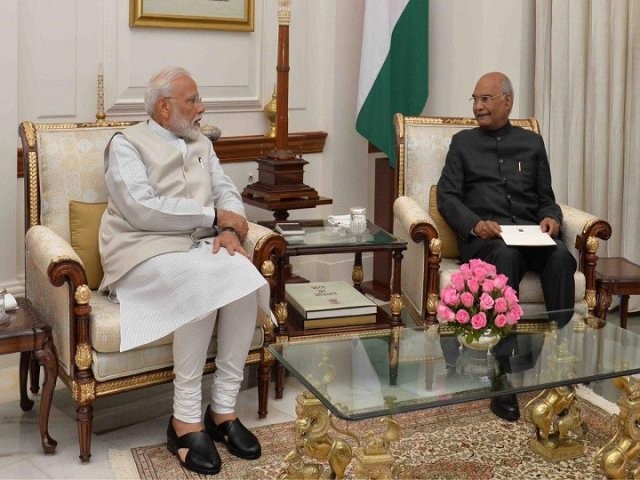 Prime Minister Narendra Modi on Friday met President Ram Nath Kovind and tendered his resignation along with his council of ministers. As per reports, President accepted the resignation of PM Modi and asked him to continue till a new government assumes office, news agency PTI quoted a communique from the Rashtrapati Bhavan as saying. "The prime minister met the president and tendered his resignation along with the council of ministers," it said. The President, however, has asked PM Modi and his council of ministers to take care of their respective offices till the government is formed. "The president has accepted the resignation and requested Modi and the council of ministers to continue till the new government assumes office," the communique said.Earlier in the day, the Union Cabinet met and passed a resolution to ask the President to dissolve the 16th Lok Sabha, the first step to the Prime Minister Narendra Modi-led NDA starting its second innings next week. Reports also suggest that the newly elected MPs of the National Democratic Alliance (NDA) will formally elect Modi as the new Prime Minister of the country.PM Modi along with Bharatiya Janata Party (BJP) president Amit Shah has led to NDA's triumphant win in 2019 Lok Sabha Elections with seizing victory on 352 out of 542 parliamentary seats across the country. The BJP, on its own, won as many as 302 seats, far beyond the 272 that the party needs for a majority in the Lok Sabha.

This is the first time since 1971 that a Prime Minister has been re-elected to office with an outright majority. This historic comeback of the BJP-led NDA government has made PM Modi the first non-Congress leader to assume PMO will such super-sized majority.The 17th Lok Sabha has to be constituted before June 3 and the process to form a new House will be initiated when the three Election Commissioners meet the President in the next few days to hand over the list of newly-elected members.
See More