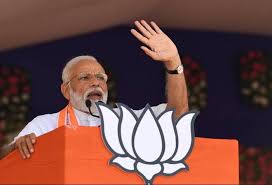 India is awaiting a new government and in the run up to May 23 -- the day of result of the Lok Sabha polls 2019, campaigners and warriors belonging to Prime Minister Narendra Modi's Bharatiya Janata Party (BJP) and Rahul Gandhi's Congress have got battle-ready.

Stay tuned to this space as IndiaTVNews.com brings to you live and latest updates on the Lok Sabha poll campaign leading upto May 23 -- the day of results.West Bengal Chief Minister Mamata Banerjee to stay in Kharagpur, near the coastal belt and monitor the situation herself, today and tomorrow. All her political campaigns for the two days have been cancelled.Bharatiya Janata Party President Amit Shah is set to address public meetings in Uttar Pradesh and Jharkhand today.

He will also be in Uttar Pradesh's Lucknow at 7:15 pm. Prime Minister Narendra Modi is slated to address three election rallies in Rajasthan today.