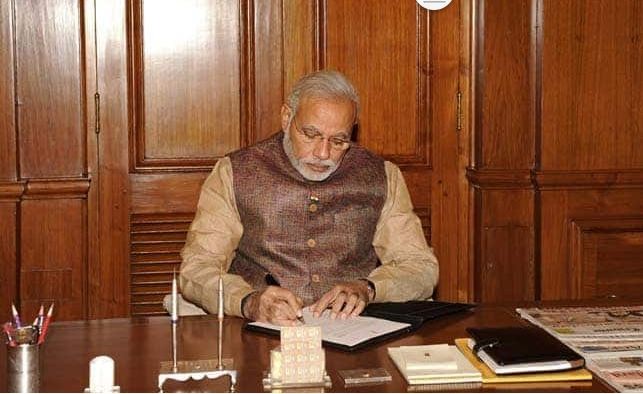 Concerned about the water crisis in rural areas, Prime Minister Narendra Modi has written a personal letter to 'Gram Pradhans' or village chiefs requesting them to conserve large amounts of rainwater during the forthcoming monsoon.

The letters, signed by the prime minister, have been hand-delivered to the village chiefs through the respective District Magistrates and Collectors in the districts.

The prime minister's letter has been become a big hit, and in several rural belts, it has become a talking point among villagers. For instance, in Eastern UP's Sonbhadra, located near PM Modi's constituency Varanasi, the prime minister's letter has been delivered to 637 village chiefs wherein he has requested them to make personal efforts to encourage villagers to initiate the process of conserving rainwater this season.

Written in Hindi with a personal touch, PM Modi says in his letter, "Dear Sarpanchji, Namaskar (Namaste). I hope that you and all my brothers and sisters of the panchayat would be in the best of health. The rainy season is about to begin. We are grateful to God that we are blessed with so much rainwater. We should make all efforts and arrangement to conserve this blessing (water)."

PM Modi has made a special request to the village heads in his one-page letter that they should convene a meeting of the gram sabha or village assembly wherein his message should be read out loud. "It is requested that a discussion should be held in the village on how to conserve water. I have faith in all of you that adequate arrangements would be made to save every drop of rainwater," the letter adds.

PM Modi has also suggested construction of check dams and ponds where proper harvesting of rainwater can be done. In Amroha district of Uttar Pradesh, DM Umesh Mishra ensured that the PM's letter was hand-delivered to all 601 village heads. The DM has already laid out a plan to dig 775 ponds in rural areas and work on 500 has already begun. Amroha, once a part of Moradabad, is considered one of the most fertile districts in UP, usually having abundant rainfall every year.

Sources in the government have told news agency IANS that during the important meeting of the NITI Aayog Council today, Prime Minister Modi would underline the need for rainwater harvesting to tackle the water crisis affecting rural areas in large parts of the country. On the prime minister's instructions, the newly constituted Ministry of Jal Shakti (Water) recently held an inter-state meeting of ministers of all the states to review the water crisis in the country.