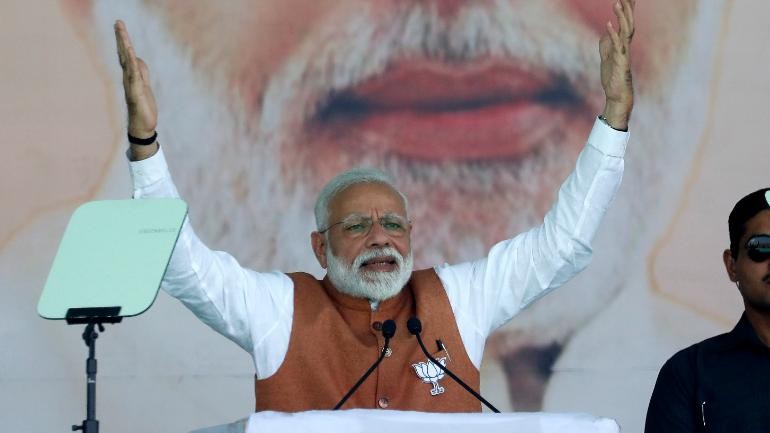 As the Opposition rallied behind Mamata Banerjee over EC ban on campaigning, Prime Minister Narendra Modi hit out at the Bengal CM saying Trinamool indulged in hooliganism during Amit Shah's rally on Tuesday. He also promised to instal a Vidyasagar statue at the same venue where it was vandalised during the clashes.

Speaking at an election rally in Uttar Pradesh's Mau, Narendra Modi said, "We saw hooliganism by Trinamool workers again during Bhai Amit Shah's roadshow in Kolkata, they vandalised Ishwar Chandra Vidyasagar's statue. We are committed to Vidyasagar's vision and will instal his grand statue at the same spot."

A bust of the revered 19th century social reformer and educationist, Vidyasagar, was vandalised during the BJP-Trinamool clashes on Tuesday. The bust placed inside the Vidyasagar College in Kolkata was broken to pieces.

The vandalism triggered a massive political row with Mamata Banerjee accusing the BJP of trying to attack Bengal's culture.

Narendra Modi on Thursday said, "I had thought the way Mamata Didi is targeting UP-Bihar Purvanchal people, calling them outsiders for her politics, behen Mayawati will surely slam Mamata didi. But this did not happen."

He added, "Some months back during my rally in West Medinipur, TMC goons indulged in hooliganism. After this in Thakurnagar the situation was such that I had to cut short my speech and was forced to leave the stage."

Tuesday's clashes and vandalism resulted in the Election Commission curtailing election campaign time in West Bengal. Mamata Banerjee immediately slammed the EC and alleged that the poll body is biased and is allowing Modi to hold rallies and preventing others from doing the same with its ban.