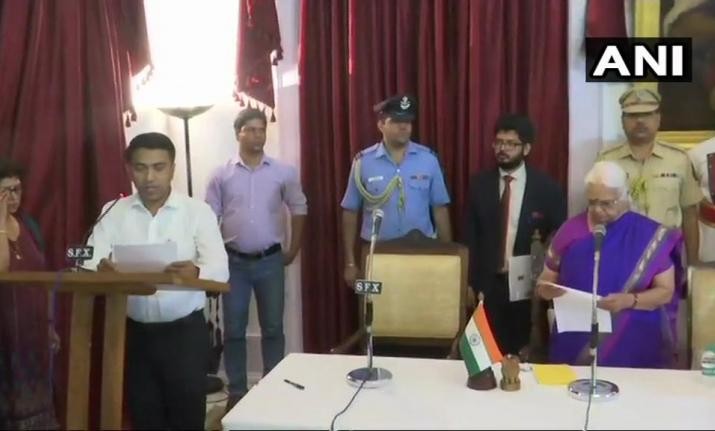 Sawant, 45, was administered the oath of office and secrecy by Governor Mridula Sinha at a formal ceremony held at the Raj Bhavan in the early hours of Tuesday. Former Speaker of Goa legislative assembly and BJP MLA Pramod Sawant was sworn in as the 11th Chief Minister of Goa on Tuesday. Vijai Sardesai from the Goa Forward Party and Sudin Dhavalikar from Maharashtrawadi Gomantak Party, both alliance partners.

Apart from Sawant and the two deputy Chief Ministers, nine other MLAs, all of them who were part of the previous BJP-led coalition cabinet headed by Parrikar, were also administered the oath of office and secrecy by Governor and inducted as ministers in the statecabinet.

The Chief Minister said portfolios would be allotted to his ministers within eight days.

The new Chief Minister heads a coalition government which has the support of 12 MLAs from the BJP, three each from the Goa Forward and MGP, and two independent MLAs, taking the tally of the treasury benches to 20 in the 36-member state legislative assembly.

"Parrikar is not among us now and this responsibility has been given collectively to me by my party, alliance partners and independent MLAs. This is a big responsibility," Sawant told reporters soon after he was sworn in.