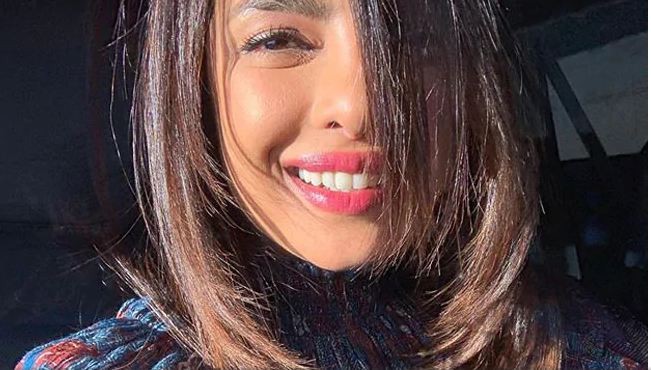 Priyanka Chopra's latest post is all about the happiness of returning back to "home sweet home" and it will surely bring a smile on your face. The 36-year-old actress, who recently flew back to her home in New York after completing the shooting of her upcoming film The Sky Is Pink in Mumbai, posted a sun-kissed selfie, in what seems to be a car, on her Instagram profile. What catches our attention is the hand she can be seen holding in her photo and it's making the Internet also very curious. Can you take a guess whose hand it is? We can only think of one person, her husband Nick Jonas. Sharing the picture, Priyanka wrote: "Home sweet home," and accompanied it with cute emoticons.

A few days ago, Priyanka wrapped The Sky Is Pink's shoot and partied with the film's team in Mumbai. She also shared a group photo with a heartfelt note stating how the film is extra "special" for her as it marks her first production in Bollywood. "And it's a wrap. This movie is special to me on so many levels. Not just because Roy Kapur Films and RSVP Movies partnered with me on my first Hindi production... But also took the chance on me to bring to life a character and a true story that needed to be told," Priyanka captioned her post. Priyanka, who launched her production house Purple Pebble Pictures in 2015, has worked with several regional films such as the 2017 Sikkimese film Pahuna - The Little Visitors, the 2016 Marathi film Ventilator and 2017 Punjabi film Sarvann among others.

The Sky Is Pink, which marks Priyanka's first Hindi film in three years, is slated to release on October 11.