Rajasthan / Rajasthan: 14 die, several injured after tent collapses due to rain in Barmer 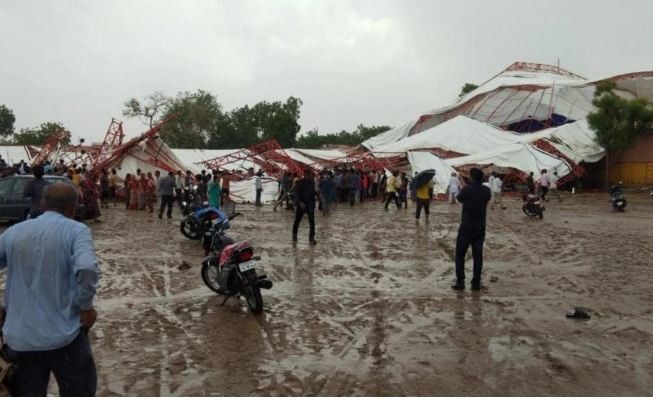 At least 14 people died and over 50 injured after a pandaal (tent) collapsed in Barmer in Rajasthan. The incident happened at around 4:30 pm due to sudden rain and storm in Barmer.

The injured persons have been admitted to a hospital. According to the reports, the locals in Barmer had assembled to listen to Ram Katha (The story of Ram).

A 'Ram Katha' was organised at Jasol area of the district when the shamiana was uprooted by strong winds trapping the people sitting under it, Additional Superintendent of Police, Khinv Singh, said.

Rajasthan Chief Minister Ashok Gehlot has announced Rs five lakh each to the next of the kin of those who lost their lives in Barmer pandaal incident. The injured will be provided Rs two lakh as compensation.

PM Modi said, "Collapse of a Pandaal’ in Rajasthan’s Barmer is unfortunate. My thoughts are with the bereaved families and I wish the injured a quick recovery."

Amit Shah said, "Pained to know about the loss of lives due to the collapse of a pandaal in Barmer, Rajasthan. I express my deepest condolences to the bereaved families. May the injured recover quickly."

Ashok Gehlot has initiated an investigation into the Barmer tent collapse case. He also said that he has directed the concerned officials to carry out the rescue and relief work.