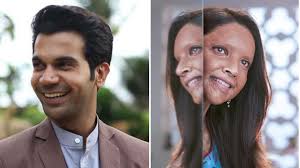 On a recent chat show, Stree star Rajkummar Rao revealed that he was the original choice for the male lead in Meghna Gulzar’s upcoming Chhapaak starring Deepika Padukone. Rajkummar couldn’t take up the role because his dates did not fit and Vikrant Massey was cast in the film instead.

When Rakummar was asked if he turned down a role in Chhapaak, here’s what the versatile actor had to say.

Deepika Padukone has been receiving plenty of praise from fans and other Bollywood celebs after the first glimpse of her look in Chhapaak was released. The actor plays acid attack survivor and motivational speaker Laxmi Agarwal in the biopic.

Meghna had earlier said that when she first saw pictures of Laxmi before the attack, the only person that came to her mind was Deepika. “I could not believe when Deepika agreed to play the role. To essay the role of an acid attack survivor is very difficult,” she added.

Chhapaak is set to theatres on 10 January 2020. Meanwhile, Rajkummar will next be seen in Mental Hai Kya opposite Kangana Ranaut. That film will release on 26 July this year.