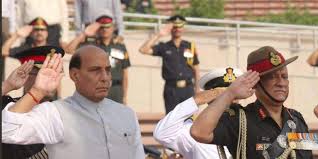 In his first visit after taking charge as Defence Minister, Rajnath Singh will Monday visit the Siachen Glacier to review the security situation. “Leaving New Delhi for Ladakh on a day-long visit to Jammu and Kashmir,” Singh tweeted this morning. Army chief Bipin Rawat and other senior officials from the Defence ministry will also accompany him.

Singh will first arrive at the high-altitude Thoise airfield in Ladakh from where he will travel to the Kumar post. Later in the day, the defence minister will go to Siachen glacier where he will interact with the Army’s field commanders and soldiers. Singh will also lay a wreath at the Siachen war memorial.At Siachen, the world’s highest battlefield, Singh will be briefed about the security situation in the region along the borders with Pakistan, and the operations being conducted by the Army, along with the support of air effort by the Indian Air Force, PTI reported.

From Siachen, Singh will go to Srinagar where Northern Army Commander Lt General Ranbir Singh and Leh-based 14 Corps Commander Lt General YK Joshi are scheduled to brief him about the security scenario along the borders will Pakistan as well as on the anti-terror operations.

The Indian Army has been maintaining the Siachen Glacier since 1984 under the Operation Meghdoot.

Soon after taking charge as Defence minister Saturday, Singh held a meeting with the top military brass, including Army chief Gen Bipin Rawat, Chief of Air Staff Air Chief Marshal B S Dhanoa and newly-appointed Navy chief Karambir Singh. During the meeting, Singh asked the Defence Ministry officers to prepare detailed presentations on all divisions and departments under him and set time-bound targets to achieve the desired outcome.