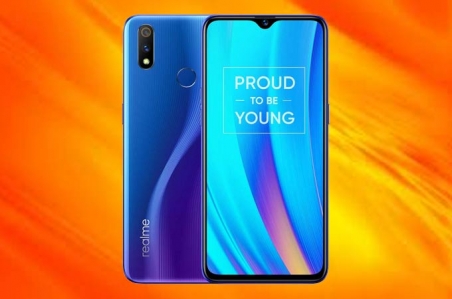 The Realme X is set to go official in China in a few days and Realme CEO Madhav Sheth has confirmed that the flagship will come to India soon after. The Realme X is tipped to be a bigger, more feature-packed flagship than the Realme 3 Pro. The phone is rumoured to come with a Snapdragon 730 chipset, notchless display, pop-up selfie camera and an in-display fingerprint sensor among other things. The Realme X briefly appeared in a leaked promo video a few weeks ago, and it has now been spotted again in a YouTube video.

The YouTube video, posted by Ben's Gadget Review, is actually a review of a Chinese laptop. During the course of the review, we notice a mysterious phone placed next to the laptop showing the back of the device and an unmistakable Realme branding. The whole placement and tease seems intentional rather than a mistake, but nevertheless we do get a pretty good look at the rear panel which is unlike any other Realme phone so far.

This leads us to believe that the phone is the upcoming Realme X, possibly given to the channel for review as we approach its launch in China. We learn a few things here - firstly, the gradient blue colour that looks similar to the render spotted on TENAA. Second, a vertical dual camera setup near the center of the panel. Lastly, the missing fingerprint sensor, which backs rumours that the Realme X will come with an in-display sensor.

It's hard to verify whether the phone shown in the video is really the Realme X or a fake, so it's best to take this with a pinch of salt. Based on what past reports have told us, the dual camera setup is said to offer a 48MP primary camera and a 5MP depth sensor. The Realme X is tipped to sport a 6.5-inch FHD+ notchless display. A Snapdragon 730 chipset should power the device. The flagship should also support VOOC 3.0 like the Realme 3 Pro. Lastly, the device will likely house a 3,680mAh battery.

Realme is rumoured to announce the Realme X on May 15 in China. In a recent interview with India Today Tech, Realme India CEO Madhav Sheth confirmed that the Realme X will come to India soon. Its price is expected to fall between Rs 15,000 to Rs 20,000.