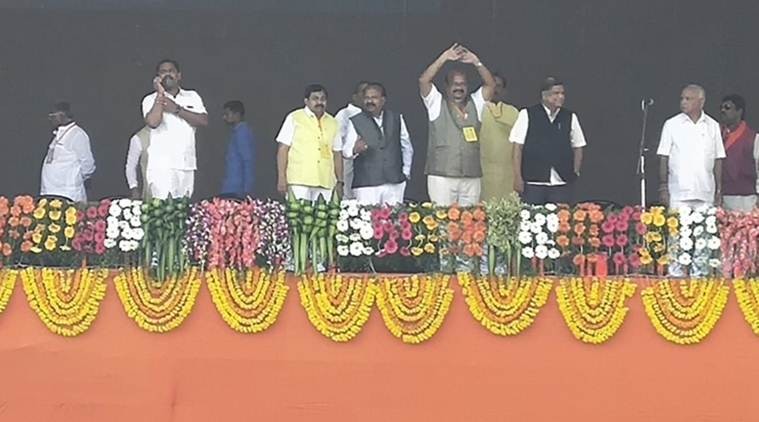 Jadhav joined the saffron party in the presence of state BJP president B S Yeddyurappa, former chief minister Jagadish Shettar and a host of other party leaders, ahead of PM Modi’s rally in Kalaburagi. “I am happy and proud to join BJP,” Jadhav said before Modi arrived on the stage. He also sought blessings from the people of Kalaburagi to bring Modi back as PM.

“Jadhav is likely to be the party’s Lok Sabha candidate for the Gulbarga seat to challenge Kharge, a nine-time MLA and two-term Lok Sabha member who has never tasted electoral defeat,” PTI quoted BJP sources as saying

Jadhav had submitted his resignation from the state legislature to Speaker Ramesh Kumar on Monday. With his exit, the strength of the Congress-JDS coalition in the 224 member Assembly has been reduced to 116. It has also reduced the strength of the house to 223, making 112 the simple majority number needed to run the government.

Jadhav, who belongs to the Lambani group, a tribal community included among scheduled castes in Karnataka, had been elected from the constituency twice — in 2013 and 2018.

The Congress has petitioned the Speaker seeking disqualification of Jadhav along with Ramesh Jarkiholi, B Nagendra and Mahesh Kumathali under the anti-defection law. The four MLAs had kept the party on tenterhooks for several weeks, defying its whip twice to attend the Congress Legislative Party (CLP) meetings on January 18 and February 8 and had skipped the early part of the budget session.