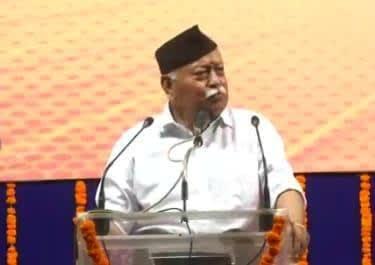 New Delhi: Rashtriya Swayamsevak Sangh (RSS) chief Mohan Bhagwat on Sunday hit out at West Bengal Chief Minister Mamata Banerjee over the ongoing doctors’ strike. Addressing participants of all-India third-year annual training camp of swayamsevaks in Nagpur, Bhagwat, said,”What’s happening in Bengal today? It shouldn’t have happened. Is it happening in any other state after elections? But if some goonda (miscreant) elements are doing it, the government must stop it.”

Furthermore, he advised Mamata Banerjee-led TMC government in state to establish rule of law using its power (dandashakti). “Many powers are trying to be a hurdle in the development of our country. It is necessary to suppress such powers on time,” a leading portal quoted Bhagwat as saying.

Earlier in the day, as the doctors’ protest entered the sixth day, the agitating medicos softened their stands and said that they were ready for talks with Banerjee at the venue of her choice. The doctors, who had gone on strike last week, however, stressed that the talks should be held in open, in the presence of media persons.

“We are keen to end this impasse. We are ready to hold talks with the chief minister at a venue of her choice, provided it is held in the open, in the presence of media persons, and not behind closed doors,” a spokesperson of the joint forum of junior doctors told reporters after a two-and-half-hour-long meeting of their governing body.

Doctors across West Bengal have stopped working since Wednesday, to protest against the brutal attack on two junior doctors by the family members of a dead patient in the NRS Medical College and Hospital.