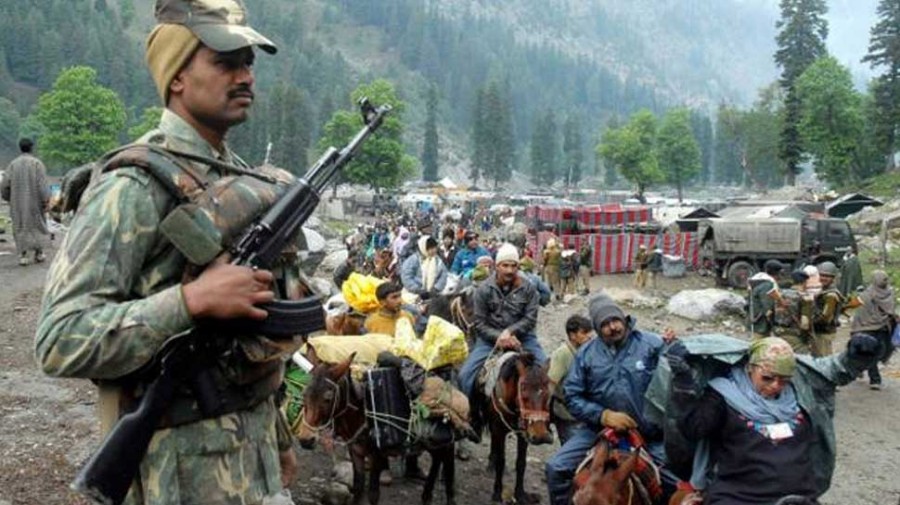 In view of intelligence warning of a possible terror attack during the Amarnath Yatra, the government has scaled up the security arrangements for the annual pilgrimage to the holy cave shrine dedicated to Lord Shiva.

According to Zee Media, the security agencies have decided to issue a 'barcode'-enabled authority slip to pilgrims to keep a track of their movement to and from the cave shrine.

The para-military forces, including Central Reserve Police Force (CRPF), have been asked to remain extra vigilant and to ensure full-proof security to the pilgrims going to the annual Amarnath Yatra, which is scheduled to begin from July 1.

This time, an enhanced number of upgraded RFID (radio-frequency identification) tags will be used on vehicles that will transport pilgrims and other civilians to and from the Amarnath Yatra.

Besides, the Centre has also decided to deploy about 40,000 central paramilitary and state police personnel to secure the 46-day annual yatra on the twin route - traditional Pahalgam track in Anantnag district and shortest Baltal track in Ganderbal district.

The annual pilgrimage to the holy cave shrine will conclude on August 15, the day Raksha Bandhan will be celebrated in the country.

Out of the total number of forces, about 32,000 are specifically meant to guard the pilgrimage to the 3,880-metre high cave shrine of Amarnath located in South Kashmir Himalayas.

According to CRPF Director General (DG) RR Bhatnagar, Amarnath pilgrims will be issued a barcoded yatra slip, which will help the security agencies in keeping a track of the exact number of pilgrims who are on the move.

The barcoded yatra slips will also help the security forces in effective monitoring of the entire Amarnath Yatra – from the base camp to the cave shrine - and improving the overall security setup.

The Amarnath Cave Shrine Board and the security agencies have prepared a "detailed plan" to ensure that all pilgrims who register for the yatra are given the barcoded slips containing their vital details, photographs and contact numbers.

From the start of Amarnath Yatra till its end, only those registered pilgrims having barcoded slips will be allowed to board the official vehicles meant for transporting them and enter the camps made for their stay.

A senior official based in Kashmir said the yatra slips will be triplicate, one each for the shrine board, pilgrim and for handing over to the checking staff on the route.

The authorities will also deploy an enhanced number of access control checking gadgets at the Pahalgam and Baltal routes.

Besides, the CRPF will use upgraded RFID tags, which will be used to mark the civilian vehicles plying on the yatra route. The RFID tags were successfully used for the first time during the Amarnath Yatra in 2018 and thousands of these electromagnetic chips were put on the vehicles.

In view of the February 14 Pulwama terror attack, the CRPF will also deploy a large number of counter-IED teams that will sweep roads and vehicles to detect IEDs and foil terror attacks.

Road opening parties to secure the transit roads in coordination with the Army, Jammu and Kashmir Police and other central forces like the Border Security Force and the Indo-Tibetan Border Police force will also be deployed to ensure a hassle-free and safe pilgrimage.

Security agencies have warned that terrorist groups operating from the Pakistan soil may target the annual Amarnath Yatra by either planting IEDs on the route or launching suicide attacks on pilgrims and security forces.

According to the latest inputs gathered by the intelligence agencies, terrorists are likely to disguise themselves in Army fatigues in order to prevent detection by the security agencies ahead of executing their nefarious designs.

Several terror outfits, including Lashkar-e-Toiba (LeT), Jaish-e-Mohammad (JeM) and Hizb-ul- Mujahideen have asked their cadres to carry out fidayeen attacks on the holy Amarnath Yatra, the intelligence agencies have warned.