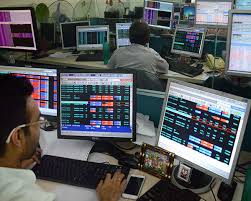 Domestic stock markets started Monday's session on a weak note tracking sharp losses in global peers. The S&P BSE Sensex fell as much as 143.99 points to 37,319.00 in early trade, and the NSE Nifty moved to 11,230.70, down 48.2 points from the previous close. The Sensex opened 28.31 points higher while the Nifty started the session 20.2 points lower. The 30-scrip benchmark index briefly traded as high as 37,505.66 - up 42.67 points from the previous close - but could not sustain gains.

Thirty two stocks on the 50-scrip benchmark index traded with losses at the time. Top laggards on the index were Eicher Motors, Indiabulls Housing Finance, Larsen & Toubro, Zee Entertainment and Dr Reddy's Laboratories, trading between 1.64 per cent and 4.18 per cent lower.

Larsen & Toubro, HDFC Bank and Kotak Mahindra Bank were the top drags on the Sensex.

Equities in other Asian markets slipped on growing uncertainty over whether the US and China will be able to reach a deal to end their escalating trade war. MSCI's broadest index of Asia-Pacific shares outside Japan dropped 0.4 per cent, nearing its two-month low marked on Thursday. Japan's Nikkei average sunk as much as 1.0 per cent to its lowest level since March 28.

Chinese shares tumbled, with the benchmark Shanghai Composite and the blue-chip CSI 300 shedding 1.4 per cent and 1.6 per cent, respectively, while Hong Kong's financial markets were closed for a holiday.

The United States and China appeared at a deadlock over trade negotiations on Sunday as Washington demanded promises of concrete changes to Chinese law and Beijing said it would not swallow any "bitter fruit" that harmed its interests.

The domestic stock markets had extended declines to eight straight days last Friday, with the Sensex and Nifty ending 0.26 per cent and 0.2 per cent lower.