Business / Singapore transport has an electric future with a hybrid twist 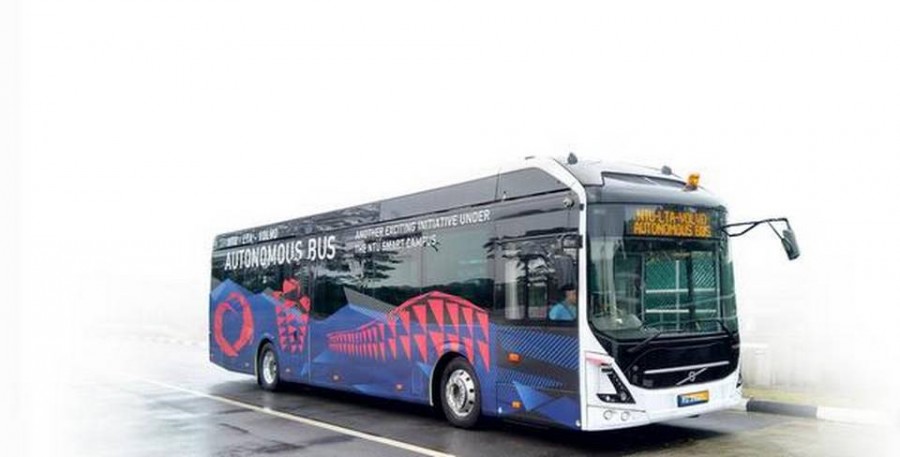 Singapore is famed both for its car-lite approach that discourages ownership of personal vehicles, and the steady expansion of its public transport system over the past three decades. The city state is now working on the next big technological leap that will potentially lead to the roll-out of driverless, fully autonomous buses in partnership with Volvo Buses.

The first trials in this race to autonomy are taking place on the smooth macadam of CETRAN, a comprehensive test centre for autonomous vehicles operated by Nanyang Technological University (NTU Singapore). Here, a Volvo 7900 series electric bus equipped with light detection and ranging sensors (LIDARS), stereo-vision cameras to capture 3D images, and a global navigation satellite system moves along test ‘roads’ with ‘hands-free’ technology in the driver’s seat. It effortlessly turns at curves, and stops at traffic lights.

There are two Volvo autonomous electric buses in the trials conducted by NTU scientists. The second one is undergoing tests at a bus depot managed by local transport operator SMRT.

The quest to develop autonomous vehicles is global. NTU President Prof. Subra Suresh told journalists invited by Volvo in Singapore that the country is working to be a leader in the development of autonomous vehicles, and is best placed to do so because of its goal to be a smart nation, its advanced infrastructure and commitment to smart technologies.

The NTU president said many companies were actively working on autonomous vehicles. “Mercedes Daimler, BMW, Tesla have sophisticated technology, and there is Waymo [Google’s project]. There are even discussions about Apple in this technology. Many universities do research. Uber and Lyft are both developing technologies for autonomy,” said Prof. Suresh.

Volvo’s partnership with NTU and SMRT to test AV technologies stands out because it is a setting far from Sweden. It was made possible by the seamless links that exist in Singapore between academic institutions and the country’s Land Transport Authority. There is also a strong electricity grid and an Information Technology backbone.

“There are significant challenges to the development of fully autonomous vehicles not just from a technological viewpoint, but on questions such as liability, insurance and social consequences for countries with large disparities and inequalities,” according to Prof. Suresh.

For Volvo, Singapore offers not just the test bed for new autonomous vehicle technologies but represents a market for development of the entire transport core.

“While the bus undergoes trials in Singapore, we have also delivered hybrid buses in keeping with Singapore’s well-thought out e-mobility journey,” Mr. Passey said.

The company has delivered 50 hybrid buses that run on both electricity and diesel, bringing down emissions and noise, cutting operating costs and raising efficiency.

Singapore has a 198.6 km urban rail network and an organised taxi fleet of 23,410 vehicles.

Its Land Transport Authority is looking ahead with Transport Master Plan 2040. New generation buses made up of a mix of clean diesel single and double deckers and e-mobility is expanding with a small fleet of hybrid buses. Electromobility, comprising full electric and, potentially, autonomous vehicles is on the cards.

India is evolving its own public transport system, and Singapore provides a comparison at some levels. Here, Mr. Passey thinks there is an opportunity to dramatically expand India’s infrastructure using urban bus systems: using clean diesel BS VI buses, hybrid buses that run on both electricity and diesel, and full electric buses as islands of excellence.

Welcoming the outlay under the FAME-II plan (Faster Adoption and Manufacture of Hybrid and Electric Vehicles), which, among other things, would help acquire over 7,000 full electric buses using the outlay of ₹10,000 crore, he said the right outcomes would come with a roadmap in place.

“From experience, I think [the shift to] BS VI fuel is good. We should not write off hybrids, because there is no infrastructure required for hybrids. While Singapore has recently inducted hybrid buses, many countries including India want to skip hybrids, and everybody wants to jump to electric. In India we are still going for BS VI and electric, but in many countries they don’t have even Euro 3 but they say we will put in an electric bus. You cannot jump from 0 to 100,” Mr. Passey said.

The economics of hybrid buses make them comparable to those running on clean diesel.

“Till about four years ago, the hybrid bus also had to be subsidised. Today, around the world, the hybrid is a commercial success. Fuel efficiency, based on how you drive, is 35-40% over diesel, and the price can be 1.5 times that of a conventional bus, or 30 to 50% higher. But it pays back early because of the fuel efficiency. An electric bus is still an expensive proposition and is not a business model in itself without significant government subsidies. Almost 50% or more can be the cost of the battery. Meanwhile, the scope for buses running on clean diesel as per BS VI norms continues to be significant,” according to Mr. Passey.

Volvo launched hybrids over a decade ago and has sold more than 4,000 electrified buses globally. E-mobility requires a collaboration that includes the government, traffic authorities, bus manufacturers, operators and charging system providers, besides the real estate sector and academic experts, he added.

Singapore operates over 19,000 buses, of which about 6,000 are public, each averaging 227 km per day. This represents the second highest fleet utilisation worldwide. The small nation with distances that do not exceed 40 km has 2,200 double deckers, the majority of them supplied by Volvo, including its newest B8L model.