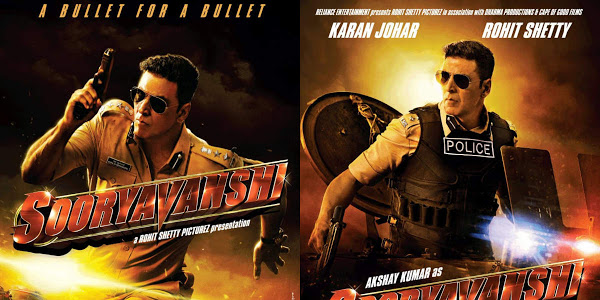 There was a time Akshay Kumar’s favourite colour onscreen was khakhi, with a slew of cop dramas in his repertoire. Come 2020 and Salman Khan’s favourite release date the Eid holiday will see Akshay back in the cop avatar, this time for Rohit Shetty. Pre-production on Sooryavanshi has begun. Akshay shared Sooryavanshi’s first look posters and wrote, “A bullet for a bullet! Get ready for Sooryavanshi on Eid 2020.

After Singham starring Ajay Devgn and Simmba with Ranveer Singh, the latest entrant in Rohit’s cop universe is Akshay’s Veer Sooryavanshi whose entry was teased in the climax of Simmba as the Anti-Terror Squad chief. Ajay’s Singham was seen discussing a case filed against Ranveer’s Simmba with him in the sequence.

Earlier, Rohit had tweeted that the pre-production on Sooryavanshi has begun. “Mission Sooryavanshi. En route Goa,” Rohit wrote alongside a picture, which showed him posing with his team in the jet bridge. Ranveer wrote in the comments section, “Oho hard company. Picture shuru.”

The three actors – Ajay, Akshay and Ranveer – have often been spotted together and have spoken about the cop universe – a first of a kind for Hindi film industry. While Singham is a profitable franchise, Simmba has become one of the biggest hits of 2018 and made records for both Rohit and Ranveer.

Coincidentally, a film with the same title, Sooryavanshi, was released in 1992 and featured Salman Khan in the lead role. The fantasy horror film was produced by Vijay Galani.