Entertainment / Student of the Year 2 movie review : The gates of St.Teresa open once more 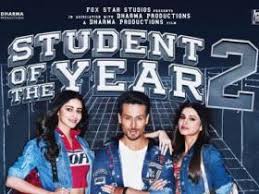 After its prequel gave us actors like Varun Dhawan, Alia Bhatt and Sidharth Malhotra, Student of the Year 2 will see another fresh batch entering Saint Teresa’s College. The Karan Johar production marks the acting debut of Ananya Panday and Tara Sutaria. The film, also starring Tiger Shroff, has been directed by Punit Malhotra.

While Ananya is actor Chunkey Panday’s daughter, we have seen Tara as a child artist in Disney India’s Big Bada Boom and sitcoms The Suite Life of Karan & Kabir and Oye Jassie. And giving company to these two girls is Tiger, who is working in a Dharma Productions’ film for the first time.

Sharing his experience of working in Student of the Year 2, Tiger had said, “I am very glad that I got a chance to work on Student of Year 2. It has been a different world for me altogether. It is a very different character too. I am not Superman. You punch me and I bleed. It is not like I am indestructible. It was a great film to work on and I would like to thank Karan (Johar) sir and Punit (Malhotra) sir for holding my hand through every scene. I would say it was a breather. A light and fun experience.”