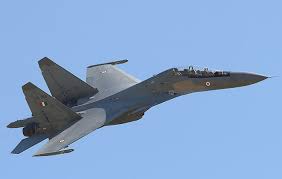 Indian fighter jets were scrambled front a frontline base in the Rajasthan sector on Monday morning to engage an incoming threat from Pakistan, a senior official in the security establishment said on condition of anonymity. Air-intrusion was over Anupgarh that is located along the International Border a few kilometers east of Bahawalpur , the base of the banned terror group Jaish-e-Mohammed.

India and Pakistan have been on the edge following an attack against Indian troopers by a terrorist of the Pakistan-based Jaish-e-Mohammed on February 14. On February 26, Indian fighter jets struck a Jaish facility at Balakot in Pakistan. Pakistan responded with a strike by its own fighters that was repulsed on February 27.

Monday’s attempted air-intrusion was over Anupgarh that is located along the International Border a few kilometers east of Bahawalpur , the base of the banned terror group Jaish-e-Mohammed.

The Indian Air Force, however, refused to comment on the drone intrusion.

The incident comes after a Pakistani drone was shot down on February 26 in the Gujarat sector. Earlier on Monday Chief of Air Staff, Air Chief Marshal B S Dhanoa said “operations” against Pakistan were “ongoing”.

All three services — Indian Army, Air Force, and Navy — are in a heightened state of alert. All ground formations especially those along the Line-of-Control (LoC) — the disputed de-facto border between India and Pakistan — and the settled border — International Border — are in a state of alert.

Air Bases in Western India — for instance, Suratgarh, Jaisalmer in Rajasthan, Bhuj in Gujarat Sirsa, Halwara, Ambala, Adamour, Bhatinda and Pathankot in Punjab and those in Jammu and Kashmir including Jammu, Awantipora and Srinagar — are launching Combat Air Patrols to ward off any incoming threats. Air bases and radar stations like those Amritsar are also on an alert.