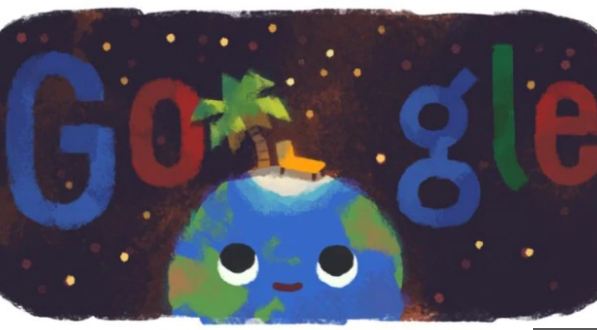 Google Doodle celebrated the beginning of Summer Solstice 2019 in the Northern Hemisphere today with an adorable cartoon.

Today, which is June 21, marks the longest day of the year and the official beginning of the summer season.

Summer Solstice also means that the people living north of the Equator will receive the most amount of sunlight throughout this single day.

In fact, further towards the north, in the Arctic Circle, the area will receive sunshine for full 24 hours.

To celebrate the beginning of Solstice, Google revealed the doodle which was a cartoon of the earth with eyes and a coconut tree and beach bench over its head. The illustration also consisted of star like spots across the doodle.

While the Northern Hemisphere will enjoy the beginning of summers today, on the other side, which is the Southern Hemisphere, people will witness the shortest day of the year.

Today the planet will be tilted at about 23.4 degrees relative to the sun's orbit, which is why the tilted part of the Earth will have Summer Solstice.

This year, the summer begins on June 21 and ends on September 23.