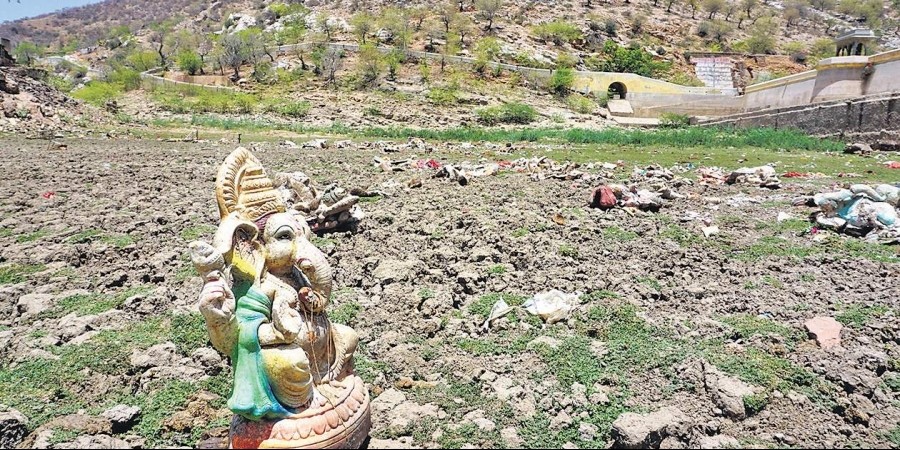 As the mercury touches 50 degrees Celsius in some districts of Rajasthan, the state is facing severe water shortage as traditional water sources are drying up in the scorching heat.

After Jaipur’s Ramgarh dam, which supplied water to the entire city, dried up a few years ago, the city was receiving water from Bisalpur dam in Tonk district.

However, this year it too went dry and 500 new tube wells were dug up to 600 feet deep to bring water to the people of the state capital.

According to Vinod Shah, a retired chief engineer of the Water Resources Department, the water crisis in the Pink City can be solved if the old, natural water bodies around it are replenished.

Eleven kilometres from Jaipur, the town of Amer is facing a similar water crisis. The town’s lakes—Mavtha and Sagar—receive hardly any water and are unable to hold water due to seepage.

While experts claim that surplus water from the Jal Mahal lake can be used to restore Amer Mavtha through a pipeline, no government action has been taken in this issue.

As water sources across the state dry up, encroachment and anicuts in the catchment areas have made the situation worse. Ajmer’s Anasagar dam and Sambhar lake are filled with dirty water and have been the victims of encroachment.

The cases of Ramgarh dam and many other traditional water bodies have reached the courts.

The state government has been fined by the courts over encroachment and other violations related to the Bandi, Luni and Jojri rivers, but no concrete steps have been taken to protect water bodies.

The low water level has made the lake’s bed visible even as digging is on to increase its capacity.

As the lake’s catchment areas did not receive any rainfall last year, it will require three times more water this year to be replenished.