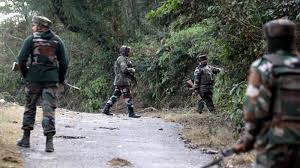 Three militants have been killed in an ongoing encounter with security forces in south Kashmir’s Pulwama district, army officials said late on Sunday evening. The gunfight between militants and security forces started in the afternoon after a cordon and search operation in Pinglish area of Tral in Pulwama. Three terrorists eliminated. Operation in progress, said army spokesman, Colonel Rajesh Kalia.

On Thursday, police said that security forces killed a foreign militant in Handwara area of north Kashmir’s Kupwara while on Tuesday, two local Hizbul Mujahideen militants were killed in an encounter with security forces in Pulwama’s Tral.

Pulwama district has been on high alert since a suicide bomber of the Jaish-e-Mohammad (JeM) killed 40 CRPF troopers on February 14 when he rammed an explosive-laden vehicle into a bus part of a CRPF convoy.

Within 100 hours of the attack on CRPF, three top JeM militants, including two Pakistanis, were killed on February 18 in the district which also led to the killing of four army personnel, one of them a major, and a policeman.

Since the February 14 attack, 19 militants (12 from JeM, 2 from LeT and 2 from HM) have been killed in various encounters across the valley while security forces have lost four policemen including a DSP, six army jawans including a major and three CRPF men including an inspector in these gunfights.