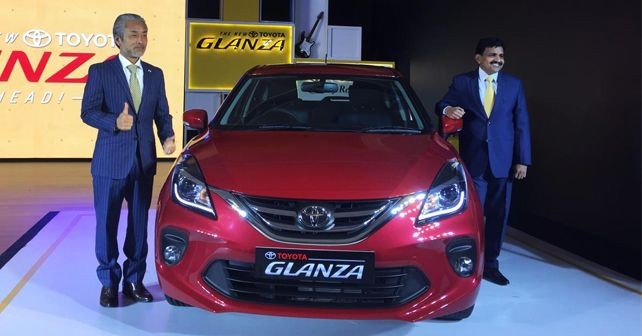 Japanese auto major Toyota on Thursday launched in India premium hatchback Glanza, its version of Suzuki's Baleno, which it is sourcing from its compatriot as part of their collaboration.

The Glanza has been priced in the range of Rs 7.22 lakh to Rs 8.9 lakh. Toyota, which is present in India through a joint venture with the Kirloskar group, is offering the Glanza only in two variants in BS-VI compliant 1.2 litre petrol engine with automatic transmission options.

Commenting on the launch, Toyota Kirloskar Motor (TKM) Managing Director Masakazu Yoshimura said that "in a dynamic market like India, it will be our constant endeavour to offer a range of options to our customers whose choices are governed by their mobility needs and expectations from brand".

TKM is offering warranty of 3 years/1 lakh kilometres that can be extended up to 5 years/2.2 lakh km. The Glanza comes equipped with features such as touchscreen audio with Android Auto and Apple CarPlay for smart phone based navigation.

When asked how Toyota would differentiate the Glanza from Maruti Suzuki's Baleno, Yoshimura said it will be based on customer experience, specially in the after-sales service. "We provide very good durable car but at the same time also we need to deliver reliable after-sales service. It is a service experience. Owning a Toyota brand means something that a customer can gain in terms of experience. Our customers are very loyal. Some Toyota customers maybe interested to look at the Glanza because of the experience of owning a Toyota brand," he said.

Yoshimura said Toyota has been able to develop a loyal customer base of 1.5 million in India not only through just its products but also by providing a whole gamut of services, including financing, insurance and even resale of used cars. "If we provide those other aspects, perhaps there should be Toyota customers (interested in Glanza)," he said, however, declining to share sales expectations from the new model.

When asked about the number of units of Glanza to be sourced from Suzuki, he said there is no concrete number. "We cannot put a fixed number but it is not as much as we want. It will be based on consumer demand," he said.

In March this year, Toyota and Suzuki expanded scope of collaboration including manufacturing of Suzuki-developed compact SUV Vitara Brezza at Toyota's plant in India from 2022.

The two companies had also stated that they were considering a concrete collaboration in new fields that would include Suzuki supplying its Ciaz sedan and Ertiga multi-purpose vehicle to Toyota in India in addition to the already agreed supplies of premium hatchback Baleno and compact SUV Vitara Brezza.

The two partners had also agreed to extend their collaboration to Europe and Africa over and above their partnership in India. Suzuki will supply its India-produced vehicles - Baleno, Vitara Brezza, Ciaz, Ertiga - to Toyota for the African market as well.

Toyota on the other hand will provide Suzuki its hybrid electric vehicle (HEV) technologies in India through local procurement of HEV systems, engines, and batteries, while also supplying THS (Toyota Hybrid System) to Suzuki in the global markets.

When asked about Toyota's future product development road map for India in the wake of its partnership with Suzuki, Yoshimura said the company could still develop its own products in the premium compact segment depending on Indian customer demand. "If the demand comes up for different flavours for premium hatchback, we would need to look at it.We are always looking at opportunities," he said, however, adding the alliance helped both the companies to focus on their core areas of strength - Toyota in medium and large vehicles, Suzuki in small segment.

Commenting on the overall outlook for the year, Yoshimura said the Indian market is "still very quiet" even after the elections, when customers were assumed to be in a wait and watch mode. He said the expectation is for the auto industry to pick up growth towards the second half of the year continue to grow through the next two-three years. As for Toyota, he said, "We are looking to grow in line with the market this year.Last year we sold 1.5 lakh units."