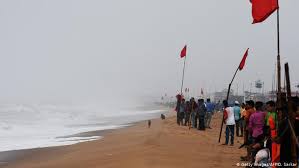 Cyclone Fani made landfall on Friday morning in Odisha , where more than 1 million people have been evacuated from vulnerable districts in last 24 hours.

Cyclone Fani, one of the biggest storms to come off the Indian Ocean in recent years, made landfall in Odisha’s Puri on Friday, India’s Meteorological Department said.

The complete process of the eye of the storm crossing the coast will be over by noon, the Met office tweeted.More than 1 million people were evacuated from vulnerable districts in last 24 hours.

On Thursday, the Odisha government conveyed to the National Crisis Management Committee (NCMC), the country’s top body for handling emergency situations, that 10,000 villages and 52 towns in nine districts will be affected due to Cyclone Fani , a home ministry statement said after a meeting of the NCMC, which was headed by cabinet secretary PK Sinha.

Two people died on Friday as Cyclone Fani slammed Odisha, an official said. “I can confirm two deaths for now. One old man in one of the shelters died because of (a) heart attack. Another person went out in the storm despite our warnings and died because a tree fell on him,” Odisha state special relief commissioner Bishnupada Sethi told AFP.