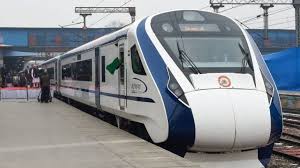 Vande Bharat, India’s first semi-high-speed train, is set to get a body double that doesn’t have any of its faults. The new train, set to arrive later this month, will be pressed into service whenever the existing one is sent for repairs, three railway officials familiar with the developments said.

Vande Bharat Express, also known as Train 18, was launched on February 15 by Prime Minister Narendra Modi amid much fanfare. Designed to run at 160kmph on electric traction between New Delhi and Varanasi, it was billed as India’s first semi high-speed train. Its use of water-based organic solvents, instead of chemicals, for cleaning purposes also won it the tag of India’s first green train.

Yet, Indian Railways has been beset by complaints about everything — from the straight seats on Vande Bharat that do not adjust to a passenger’s posture, to noise in the cabin, to the location of the bottle holder, to the cumbersome access, to the washbasin, to the lack of a clothes holder in the washroom.

It was pelted with stones so often by troublemakers that the national transporter had to install cameras on its exterior to detect and deter them. And on numerous times, it ran over cattle straying on to the tracks.

The back-up train, likely to arrive in New Delhi by the end of May, will have adjustable seats and fully functional washbasins and will be used every time the old unit is sent for maintenance, the officials cited above said.

Its current schedule of operating five times a week left no time for repair work.

“Despite tight schedule and repeated damage, not a single trip of Vande Bharat Express has been cancelled and sometime we replaced the damaged glass within two hours to ensure the train runs on time the next morning. The new train will be kept on standby so that if needed, it can be replaced, and the old one can be taken for proper maintenance,” said a railway board official.Indian Railways has incorporated changes in the second train on the suggestions and feedback received from passengers and its own employees, the officials said.

The transporter didn’t reveal the exact number of complaints it had received. A second official said that most of the complaints were minor and had been fixed. For instance, passengers have complained that the seats don’t allow them to lean back far enough. According to the Railways, because Vande Bharat is a semi high speed train, the seats have been designed in such a way that they can’t recline beyond 4 inches to avoid damage to the spine.

“Both maintenance staff and passengers have given the feedback. One of them was noise in the cab which has been addressed by improved sound insulation and relocation of the horn. On suggestion of the Indian Railway Catering and Tourism Corporation (IRCTC), additional pantry space has been provided. Cattle guard has also been strengthened to reduce damage due to cattle being run over,” said a railway official.

On the day of the launch , the train broke down because of cattle likely straying onto the tracks. This was during its return journey from Varanasi to Delhi.

According to the Railways, at least 12 window glasses have been changed so far and despite a counselling and awareness drive, incidents of stone pelting continued to take place.

On February 22, the train’s aerodynamic nose, which is made of steel with a fibre cover on it, was damaged severely and had to be replaced after a bull hit it from the front. A day later, the driver’s windscreen and windows of some coaches were damaged after being hit by flying ballast .

“We are confident of introducing the new train by the end of this month. Initially, the train will be on standby for Delhi-Varanasi route, which has witnessed 100% occupancy almost every day,” said Rajesh Aggarwal, member (rolling stock) of the railway board.

Railway minister Piyush Goyal has set a target of 100 more Vande Bharats. Goyal said at the inaugural run of the train that the department will look to export such trains in the future. In 2019-20, Railways aims to manufacture 10 such trains.