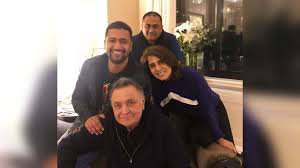 Vicky Kaushal is currently in the US where he’s set to ring in his birthday on 16 May. Before heading off to celebrate, the Raazi actor popped by to visit Rishi Kapoor and Neetu Kapoor in New York where the 66-year-old actor has been undergoing treatment for cancer.

Rishi Kapoor appears to be on the mend and, according to his son Ranbir, will return home to Mumbai in a couple of months. The actor initially chose not to disclose the nature of his illness. At the end of April, filmmaker Rahul Rawail revealed in a Facebook post that Rishi was “cancer-free”. The actor then confirmed the same to Deccan Chronicle saying, “My eighth month of treatment started on 1 May in the US. However, by the grace of God, I am cancer-free now.”

Vicky Kaushal is set to celebrate his 31st birthday with old college friends at a countryside villa in New York. He recently posted a snapshot of him eating ice cream while on vacation.After this mini-vacation, Vicky will return to India and continue filming for his upcoming biopic Sardar Udham Singh. The film will be directed by Shoojit Sircar and is inspired by the real-life story of Udham Singh, a revolutionary known for the assassination of Michael O' Dwyer, the former Lieutenant Governor of Punjab in India in retaliation for the Jallianwala Bagh massacre.