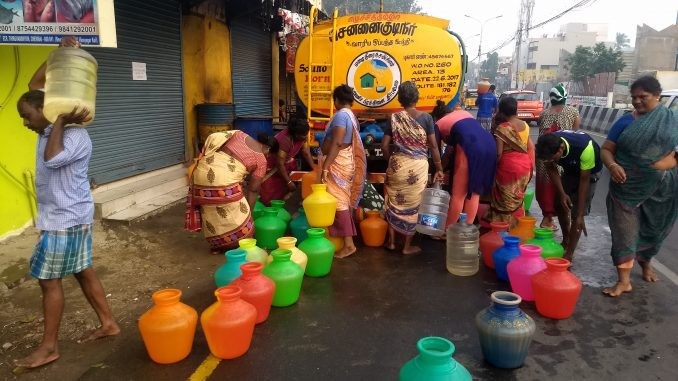 Chennai is facing an acute water crisis after its four reservoirs - that are the main sources for drinking water in the city - have turned dry and ground water levels have plummeted due to scanty rain. Authorities in the Tamil Nadu capital have piped water supply by 40 per cent. The shortage of water has hit IT companies, five-star hotels and high-rise residential buildings. Among the dried-up reservoirs is the Chembarambakkam lake, Chennai's largest source of drinking water. The lake is bone dry with a parched and cracked bed. Chief Minister E Palaniswami said his government is taking necessary steps to supply drinking water.

A majority of Chennai's residents now depend on private water tankers. Already expensive, they have now doubled their prices but even then the water doesn't reach them on time. Syed Altaf, an office-goer says, "It's a huge challenge for us. Water is the backbone of our industry. Chennai is in panic mode. Earlier we just required one call we would get the water the same night. Unfortunately it takes four days now".

With barely enough water to drink, for many bathing or washing clothes is out of the question leading to fears of illness and disease. "We don't get water even to bathe. I have an office-going son and a daughter at home after college. I work. Water is not enough," Vijaya, who lives in the heart of the city, said.

Punitha, her neighbour and a mother of two waits for hours just to get a little water every two days from a government tanker. She gets just seven pots of water on alternate days for her four-member family. "Our children are not able to go to school and college. We collect water from the Valluvar Square tank at 1 am or 2 am. Boys can do that. What would girls do?" she told NDTV.

"Water is being supplied through tankers and desalinated water is also being distributed," Chief Minister E Palaniswami said. Mr Palaniswami said water from the Mettur Dam was being released to replenish Veeranam Lake in Cuddalore district and supply drinking water to Chennai as all the city.

Along Chennai's IT corridor, high-rise apartments and IT parks are under severe stress with no piped water supply. Turyaa, a five-star hotel requires one lakh litres a day but it gets just half of it. A popular restaurant in Teynampet had stopped serving meals for lunch, for want of water. The restaurant manager says they faced severe scarcity of water and thus decided to stop meals. "Today we lifted the ban as tankers resumed supply," he said.

The groundwater in Chennai and its surrounding areas is replenished by five lakes -- Puzhal, Sholavaram, Kaliveli, Pulicat and Maduranthakam -- all located within a 60-km radius of the city.

An old plan to build a new reservoir outside Chennai is yet to take off. Although lakes had overflowed due to unseasonal rains, causing devastating floods in Chennai in 2015, little was done to prevent water from flowing into the sea. In addition, government has not fast tracked the plan for an extra desalination plant.

Coming down heavily on encroachments on water bodies, the Madras High Court on Tuesday sought a detailed report about number of lakes and reservoirs in Tamil Nadu besides steps taken for desilting.  "True that there is failure of monsoon for quite some time now. We have seen rules framed by the government for rain water harvesting... steps to have been taken for desilting four tanks in Chennai and the availability of water for supply to public in Chennai," the court said.

Manohar Khushalani, former director of the National Water Academy, told NDTV, "In 2015, Chennai had floods. The same reason that caused the floods is causing the drought. Reservoirs and canals have to be restored and encroachment should stop."