Special / World Cup 2019: Vijay Shankar back in nets ahead of 2nd warm-up after injury scare 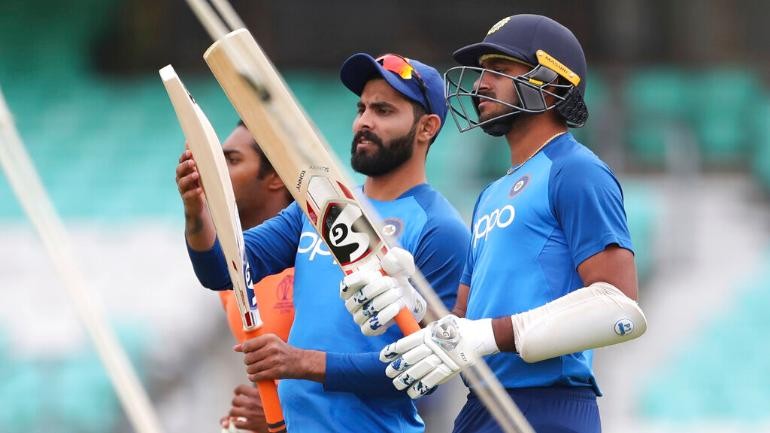 India received a major boost on Monday as Vijay Shankar returned to the nets to get some batting practice ahead of the team's second warm-up match against Bangladesh on May 28.

India all-rounder Vijay Shankar got hit on his wrist during the first practice session in London and was sent to the hospital for scans but was cleared of any fracture. Shankar though, did not take any part in the first warm-up game against New Zealand on May 25 just as a precautionary measure.

And on Monday, Shankar returned to the nets and was looking untroubled while batting in full flow.

Another key member of the team returned to the nets on Monday and it was all-rounder Kedar Jadhav who had been recuperating from the shoulder injury that he had suffered during the Indian Premier League 2019.

Jadhav too had missed the first warm-up match and was seen sitting on the sidelines with an ice-pack on his left shoulder. The injury had forced him to miss the last few matches for Chennai Super Kings in IPL 2019. He was trying to save an overthrow during Chennai Super Kings' final league match of IPL 2019 against Kings XI Punjab at the Punjab Cricket Association Stadium when he got injured.

Jadhav spent his time recovering with Team India physio Patrick Farhart after the injury and passed a fitness test on Thursday. Farhart submitted his report to the Board of Control for Cricket in India (BCCI) declaring Jadhav fit to resume playing for the team.

Meanwhile, the Indian team will be looking to move on from their mistakes in the first warm-up match and register a win against Bangladesh in the second warm-up match in Cardiff on Tuesday.India had lost the first game comprehensively by 6 wickets against a strong side led by Kane Williamson. The two-time World Cup champions were rattled by the pace and swing of Trent Boult, James Neesham and the likes as they got bowled out for 179, batting first.

The Black Caps then chased down the target in 37.1 overs with Ross Taylor (71) and Kane Williamson (67) top-scoring for their side.

India's bowling performance was, as usual, on the mark in that game with Jasprit Bumrah leading the attack while Bhuvneshwar Kumar, Mohammed Shami, Hardik Pandya and the spinners - Kuldeep Yadav and Yuzvendra Chahal - gave good support.

But the batsmen will be looking to get back among the runs and spend some quality time at the crease in the second game against Bangladesh.