World / Zardari handed over to anti-graft body for 10 days 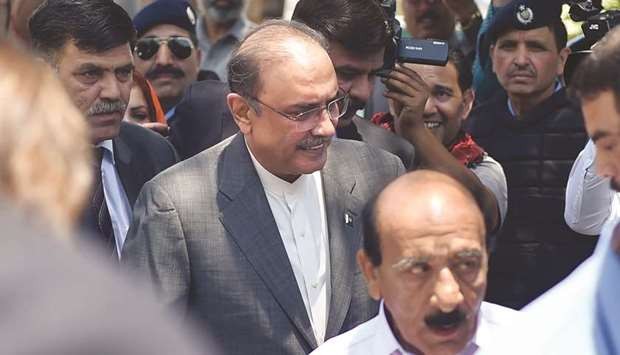 A Pakistani court handed over the country’s former President to a national anti-graft body on Tuesday for questions regarding a multi-million dollar money laundering case.

Asif Ali Zardari will be held for 10 days pending investigation on corruption charges. He will appear in court again on June 21, when the anti-graft body is expected to press or drop charges.

The court order came a day after Mr. Zardari was arrested after the rejection of his and his sister’s bail applications. However, authorities did not arrest Faryal Talpur; no explanation was given.

Both the former President, currently a member in the lower house of Parliament, and his sister had been accused by the National Accountability Bureau of holding dozens of bogus bank accounts. They have denied any wrongdoing.

Mr. Zardari’s Opposition Pakistan People’s Party claims the charges against him were politically motivated, which the government denies.

Several prominent politicians and businessmen have been swept up on corruption charges since Prime Minister Imran Khan took office last year. Mr. Khan campaigned heavily on promises to root out graft among the country’s elite.

Also on Tuesday, the anti-graft body arrested Hamza Shahbaz, a politician who is the son of the Opposition leader Shahbaz Sharif, after the rejection of his bail in a corruption case.

He is also the nephew of the former Prime Minister Nawaz Sharif, who is currently serving a jail term over corruption charges.

Mr. Sharif and Mr. Zardari are longtime political rivals but their parties recently joined together, vowing to launch a protest campaign against Mr. Khan’s government over increasing inflation and a spike in prices of essential food items.

Meanwhile, the police in London on Tuesday arrested Altaf Hussain, the self-exiled leader of the ethnic-based Muttahida Qaumi party. Pakistan has sought his arrest since a televised speech in August 2016 condemning the country’s politically influential army, state-run media reported.

It was not immediately clear why British authorities had detained Mr. Hussain. The London police said in a statement that the investigation was ongoing.