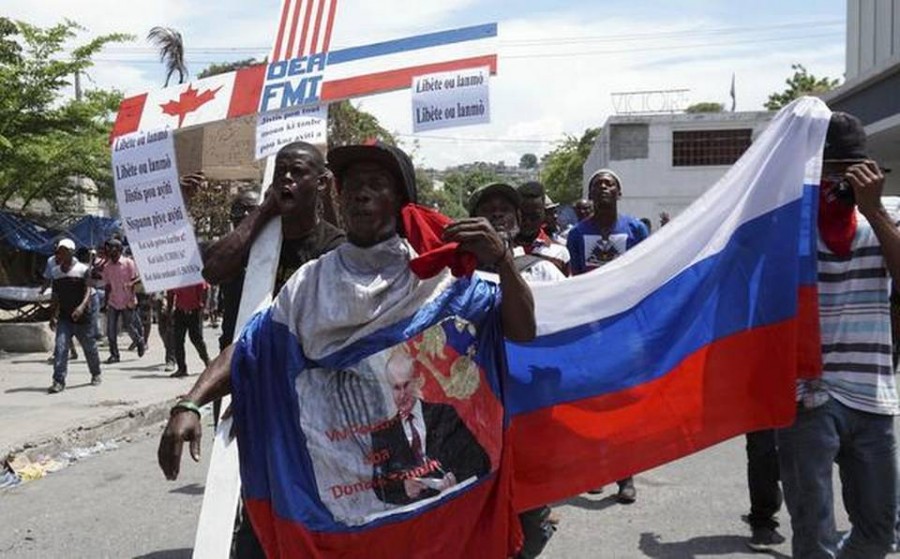 Thousands of protesters demanding the resignation of President Jovenel Moŵfracse clashed with police Thursday as some tried to storm barriers outside the National Palace while others sought shelter as heavy gunfire echoed in nearby streets.

The demonstration came a day after Moŵfrac}se broke his silence over the country’s recent unrest and rejected demands that he step down over allegations of officials misusing funds from subsidized oil shipments from Venezuela under the Petrocaribe program. He denied any wrongdoing.

Among those who joined the protest, which began peacefully, was 39-year-old Carl-Henry JanviŞre, who recently lost his job as a delivery man after his company laid people off amid record inflation.

“I’m supporting these young kids to see if we can have a change in this country,” he said. “People are corrupt and are not providing any service to the population. I’m tired of it. I don’t know what I’m going to do in the next few months to feed my family.”

Violence also broke out last week during protests in a number of Haitian cities. The latest protest followed a strike Monday and Tuesday that shuttered schools, businesses and government offices, shut down public transportation and caused a Parliament session to be suspended. Businesses and schools were slowly reopening by Thursday, but burning tires still blocked some streets and it was difficult to reach some towns outside Port-au-Prince.

The crowd initially drew hundreds of people then slowly grew throughout the day, with people like Marie Saint-Louis, a 29-year-old mother of two, joining in.

“My husband passed away,” she said. “I’m not getting any help from this country. Life is extremely hard around here. ... You hear money is coming into this country and you don’t know what the hell they’re doing with the money. We’re getting aid from different countries, but if you look at Haiti, it looks like it never received any aid at all- garbage, no electricity, no water, no real medical center or hospital.”

A Senate investigation has said at least 14 former government officials allegedly misused $3.8 billion under the administration of former President Michel Martelly. A report that was recently released leveled new accusations against government officials.

A second protest was planned for Friday despite Moŵfrac}se calling for people to stay calm in a brief speech Wednesday as he celebrated the anniversary of Haiti’s police force.

“I am not going to allow anyone to commit chaos under any pretext,” the president said. “I am asking you to stay calm.”