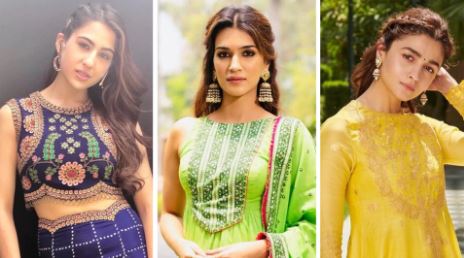 One the most prominent festivals of Hindus, Navratri is a celebration of the victory of good over evil. The festival spans over nine days with each day dedicated to a different avatar of Goddess Durga.

Durga is considered to be the bravest and fiercest Goddess. She is the epitome of women empowerment, and is also referred to as Shakti, Durga protects mankind from evil and misery,

Navratri is celebrated differently in different parts of India. People observe fasts during Navratri as a gesture of respect for the Goddess. In north eastern India and prominently in West Bengal, huge pandals are set-up where devotees offer prayers. Using plays, the mythological story of Maa Durga’s battle with the demon Mahishasura is narrated.

In the northern states, Navratri is celebrated as Lord Ram’s win. On the Day Of Vijaydashami, Lord Ram defeated Ravana and rescued his wife Sita. The story is narrated through Ramlila.

All nine days of Navratri are assigned to a different avatar of Goddess Durga, and a different colour is assigned to each day. Here are the nine colours to sport this festive season:

One of the first few avatars of Maa Durga, Goddess Shailputri is worshipped on this first day. Also known as Sati, Bhawani and Hemavati, the Goddess is the daughter of Himalaya.

Brahmacharini, the second avatar of Maa Durga is worshipped on this day. She practices devout austerity and is depicted holding a Kamandal (a utensil) in her left hand and a japa mala (rosary) in her right hand.

The colour for the day is Yellow. Yellow symbolizes happiness and strength. On this day, sugar is offered as bhog to the Goddess.

The day is dedicated to Goddess Chandraghanta who is considered as the apostle of bravery. She also represents beauty and grace. She is also known as Chandrakhanda, Chandika or Rannchandi and it is said that her third eye always open.

On the third day milk is offered as bhog to Maa and the colour for the day is green which symbolizes nature and energy.

Goddess Kushmanda is worshipped on this day. According to mythological texts, she created the Universe just by smiling and made it verdant with vegetation. She is also considered as the goddess of wealth and prosperity.

The fifth day is dedicated to Goddess Skandmata. The meaning of her name is mother of Skand. Skanda is another name for the Kartikeya who was the Chief Commander of the Devas in the war against demons.

The colour for the day is orange which symbolizes agility and happiness. Banana is offered as bhog to the Goddess.

On this Day, Goddess Katyayani is worshipped. She was born to sage Kata and is considered to be the sister of Lord Krishna. Devotees wear white and offer honey to the goddess as bhog.

Goddess Kalratri is worshipped on on the seventh day. She is said to be the destructive avatar of Durga. Red ,the colour of fire and blood, is worn on this day and jiggery is offered as bhog.

The day is dedicated to Goddess Mahagauri. The eight day is also called Mahashtami. Pink which symbolizes ambition and desire is the colour for the day. Coconut is offered as bhog to the Goddess.

Goddes Siddhidatri is worshipped on this day. Purple is the colour for the ninth day which symbolizes ambition and power. This is the day to culminate the fasts people observe during Navratri. Some people also worship Kanyas which are considered to be the human forms of Maa Durga and offer them home-cooked Halwa Poori as prasada. 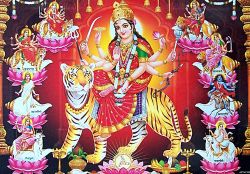