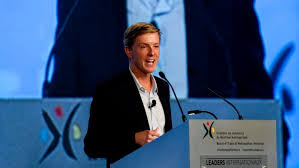 “It is time to break up Facebook,” said the social network giant’s co-founder Chris Hughes. He said that Facebook is “mired in several data scandals and privacy violation cases.”

Talking about his fellow co-founder and the present CEO of the company, Mark Zuckerberg, he said that these privacy violations have happened because Zuckerberg has wielded “unchecked power” and influence “far beyond that of anyone else in the private sector or in the government.”

In an opinion piece in The New York Times (NYT) on Thursday, Hughes said the government must hold Zuckerberg accountable.He highlighted the reasons why Facebook has taken the shape that it has today and said, “The company's mistakes — the sloppy privacy practices that dropped tens of millions of users' data into a political consulting firm's lap; the slow response to Russian agents, violent rhetoric and fake news; and the unbounded drive to capture ever more of our time and attention — dominate the headlines.”

Hughes was recruited by Zuckerberg for Facebook when he was in his freshman year at Harvard University in 2002.

"Mark is a good, kind person. But I'm angry that his focus on growth led him to sacrifice security and civility for clicks," argued Hughes.In light of this, he said that he is worried that Zuckerberg has surrounded himself with a team that reinforces his beliefs instead of challenging them.

Embroiled in users' data scandals, Facebook is set to create new privacy positions within the company that would include a committee, and external evaluator and a chief compliance officer, stated an NYT report earlier this month.

Facebook has already kept aside $3 billion, as the company is anticipating a record fine from the US Federal Trade Commission (FTC) related to the Cambridge Analytica data scandal that involved 87 million users.

"We are a nation with a tradition of reining in monopolies, no matter how well intentioned the leaders of these companies may be. Mark's power is unprecedented and un-American,” said Hughes."It is time to break up Facebook," added Hughes who currently works as a co-chairman of the Economic Security Project and senior adviser at the Roosevelt Institute.

"I know we don't exactly have the strongest reputation on privacy right now. I am committed to doing this well. This is a fundamental shift in how we build products and run our company," said the CEO of Facebook earlier this month at the company’s F8 Conference in San Jose, California.

The Facebook case is being looked at as a measure of the US President Donald Trump administration's willingness to regulate US tech companies.