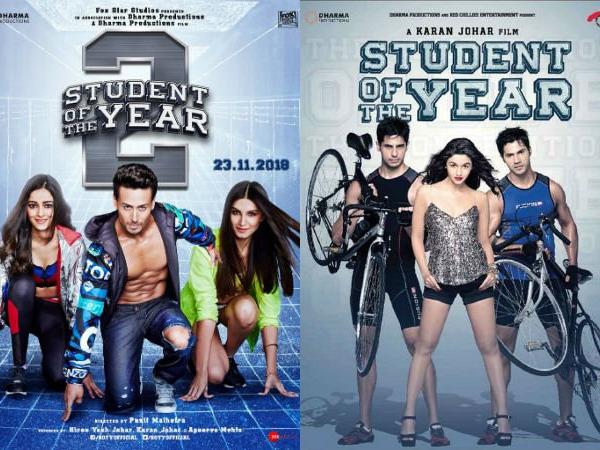 Student Of The Year 2 is an unbelievably shallow mix of Karan Johar's Student Of The Year and Mansoor Khan's Jo Jeeta Wohi Sikandar, with shaky performances and forgettable songs in an ultra-glamorous setting. It looks like director Punit Malhotra was so overwhelmed by the staggering budget allotted to the film that he directed all his energies towards making everyone and everything look good, and completely forgot to focus on logic and continuity in the process.

The narrative revolves around the race to the Student Of The Year trophy, a superficial competition where girls only cheer from the sidelines while the boys battle it out on the field. Of course, academics do not feature at all in determining who is the best student; all it takes is a sprint and a kabaddi match. Wish our schools were as generous.

Rohan Sachdev (Tiger Shroff), a sinewy kabaddi champ from Pishorilal Chamandas College, follows his childhood sweetheart Mridula Chawla (Tara Sutaria) to the prestigious St Teresa's College on a sports scholarship. However, Mridula has now "evolved" into Mia, and Rohan must woo her afresh. Meanwhile, he gets off on the wrong foot with poor-little-rich-girl Shreya Randhawa (Ananya Panday), who is determined to make his life miserable.

There is some manipulation and heartbreak, which results in Rohan getting kicked out of school and issuing a challenge to star student and two-time winner of the Student Of The Year award Manav Singh Randhawa (Aditya Seal) that he will walk away with the trophy this time.

Tiger Shroff is in top form, physically, and backflips and scissor-kicks his way through Student Of The Year 2. However, he does not showcase much emotional range and instead chooses to let his muscles do the talking for him. Debutantes Ananya Panday and Tara Sutaria look stunning and dance like a dream, but do not have any acting skills to write home about. Aditya Seal is great in the action department, but has a limited scope of performing, thanks to the weak writing.

Continuity errors are glaring. In one scene, Rohan shows Mia the tattoo of her name that he got on his forearm. In the very next scene, he is dancing away to Yeh Jawaani Hai Deewani with un-inked arms. There is also a scene where the captain of the kabaddi team of Pishorilal Chamandas College is badly beaten up and has to get multiple stitches. In the next sequence, when the team is training hard to win the Dignity Cup, his bandages vanish, only to reappear a while later.

While Karan Johar's original was more diverse and also featured not-so-athletic students, the newest batch of St Teresa's seems to have only jaw-droppingly gorgeous pupils who are impeccably dressed. Awkward adolescence, what's that?

If you thought the crowd-pleasing numbers are the saving grace of Student Of The Year 2, you will be disappointed on that front too. None of the songs have the catchy quality of the original Student Of The Year album, save Yeh Jawaani Hai Deewani, which is not an original composition anyway.

Unless you are an ardent admirer of Tiger Shroff's flying kicks, stay away from Student Of The Year 2.