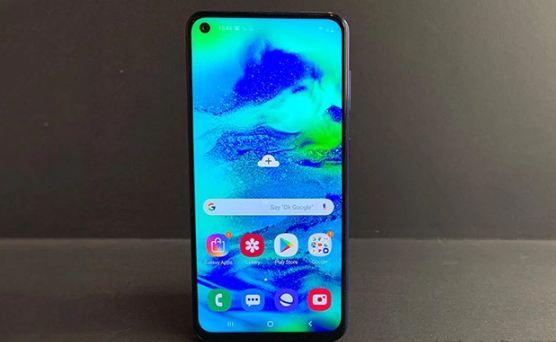 Samsung’s fourth Galaxy M-series smartphone, the Galaxy M40, is the first mid-range phone from the company with its Infinity O display. The front camera is under the display in the hole punch on the top left of the screen and this has helped Samsung achieve a near bezel-less display.

Samsung Galaxy M40 is priced Rs 19,990 and like the Galaxy M10, 20, and 30, this remains an online exclusive. Another feature that stands out is the On Screen sound technology where the display doubles up as a speaker. There are three cameras at the back and a Snapdragon 675 processor. We spent a few days with the Samsung Galaxy M40 and here is our review:

Samsung Galaxy M40 gets a polycarbonate body design, which feels glass-like and gives a premium look, which we liked. Another plus is it is lightweight. We got the Seawater Blue colour option for review that looks stylish, thanks to the slight gradient effect. Though a small addition, the middle camera sensor at the back has a silver ring around it, which stands out very subtly.

The display is Infinity O, which certainly will turn heads given it is a unique feature for a mid-segment phone. The screen has over 91 per cent screen-to-body ratio, therefore thinner bezels, and more viewing space, which is great. Plus a Widevine L1 certification is good to see, which allows for watching Full HD content on Netflix, Amazon Prime, etc.

Samsung Galaxy M40 gets a polycarbonate body design, which feels glass-like and gives a premium look, which we liked.

The display has decent viewing angles and icons look sharp, though I had to turn the brightness to the maximum in bright sunlight for better visibility. A Super AMOLED display on a Rs 20,000 phone would have been nice, especially since the Galaxy M30, which is priced around the same, comes with one.

You get three cameras at the back, which perform well in well-lit places. The pictures had a decent amount of details. My only issue was the pictures did not look quite sharp and the colours don’t pop up, but rather look washed out. The Portrait shots came out really well with the subject well defined and the background blurred. Do not expect much in dimly lit places as the photos lacked details and were not quite sharp.

The 16MP front camera does a good job of taking pictures in daylight. I especially liked the ones with the Beauty feature turned off. The photos look sharp with enough details and colours seemed close to natural, which I liked. However, I noticed that some photos looked burnt out. The low-light performance was a bit of a miss as the camera ends up losing details in photos and smoothening the edges, which makes photos look artificial.

Samsung Galaxy M40 is powered by the same Snapdragon 675 processor, same as rival Xiaomi Redmi Note 7 Pro. Frankly, day-to-day performance is not an issue on the phone as it can handle most daily tasks such as making calls, messaging, browsing social media, listening to songs, etc with ease. I did not notice lag or stutters while switching between tabs, even with multiple tabs open. The apps opened quickly.

There is no 3.5 mm headset jack, which could be an issue for some users.

I played graphics-heavy games like Asphalt 9 without a stutter for up to 30 minutes. There were no noticeable frame drops, which is great. The phone does get a little warm from the top within 15-20 minutes when playing such games. There is no 3.5-mm headset jack, which could be an issue for some users.

The 3,500mAh battery lasts for a day with moderate usage, which includes making calls, streaming music, watching videos for about two hours daily, and browsing social media. The battery is smaller than 5,000mAh on Samsung’s own Galaxy M20 and Galaxy M3 as well as Galaxy A50 in the same price bracket, which is a bit disappointing. A full charge from about 20 per cent battery left takes a little over an hour.

Samsung Galaxy M40 appears to be a decent phone for the price. Yes, there are multiple options in the market like the Redmi Note 7 Pro and Moto G7, but still I genuinely liked the Galaxy M40. It gets a lot of things right, and that’s what matters to average users at the end of the day. If you are looking to buy a mid-range smartphone that offers a large display for watching videos, has a respectable camera and looks stylish, I think you should probably consider the Galaxy M40.