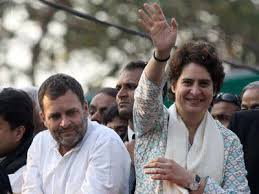 Congress is all set to launch its 2019 Lok Sabha poll campaign from Prime Minister Narendra Modi's bastion Gujarat today (March 12). The principal opposition party has charted out a day long program - which is fully loaded with a "political message" in Ahmedabad and Gandhinagar. CWC will be meeting in Gujarat after 58 years. The CWC is the highest decision-making body of Congress.

When asked why the Congress decided to launch its campaign from Gujarat, Shaktisinh Gohil said, "There can't be a better place than Gujarat to launch our Lok Sabha poll campaign. This is the birth place of Mahatma Gandhi and Sardar Patel. We are celebrating 150th birth anniversary of Mahatma Gandhi ji. Mahatma Gandhi led the Dandi March on March 12 - that is why we will hold a prayer meet at Gandhi Ashram followed by CWC meeting at Sadar Patel Memorial Hall."

This CWC is also significant as it will be Priyanka Gandhi Vadra's first meeting of the committee as the party's newly appointed General Secretary.

According to authoritative sources, the CWC will be coming out with resolutions on failure of the Modi government in the last five years and also review the party's preparations for the forthcoming Lok Sabha elections.

AICC incharge of Congress in Gujarat, Rajiv Satav said, "Rahul ji had said that we will play in the front foot this time and by declaring our candidates, we are already a step ahead. After 58 years, Cthe WC meet will be held in Gujarat and we will officially launch the Lok Sabha election campaign from here."