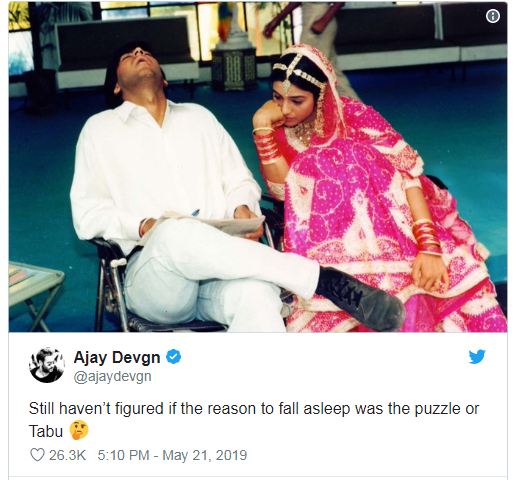 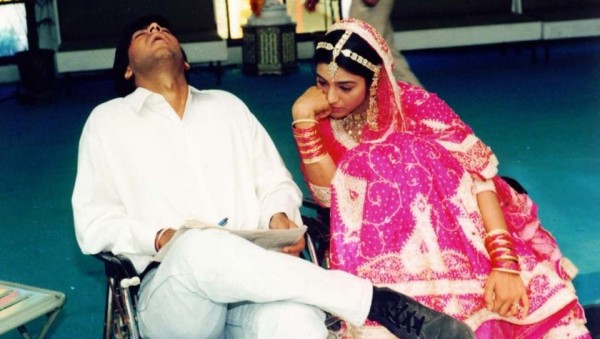 Actors Ajay Devgn and Tabu are back with their new film, De De Pyaar De. The duo is not only wonderful co-stars but also share a very close bond in real life. Ajay has now taken a gentle swipe at Tabu by sharing a throwback picture from the 90s.

In the picture, Ajay can be seen sleeping with his mouth wide open while Tabu is sitting beside him, looking bored. He captioned it, “Still haven’t figured if the reason to fall asleep was the puzzle or Tabu.” The two are in costume for their song Aayiye Aapka Intezaar Tha on the sets of their 1994 film, Vijaypath. The song was sung by Kumar Sanu and Sadhna Sargam. Ajay had played Karan in the film, who loses his eyesight. Tabu played his love interest in the film.

Ajay and Tabu have featured in several films including Drishyam, Golmaal Again and Thakshak. Tabu had said in an interview to Mumbai Mirror that they know each other since 25 years. Talking about Ajay, she said, “He was my cousin Sameer Arya’s neighbour and close buddy, a part of my growing up years and that has laid the foundation of our relationship. When I was young, Sameer and Ajay would spy on me, follow me around and threaten to beat up any boys who are caught talking to me. They were the big bullies and if I am single today, it is because of Ajay. I hope he repents and regrets what he did.”

She had also revealed that she has asked him to find a suitor for her to marry. “If there is anyone I can count on, it’s Ajay. He is a like a child and yet so protective. The atmosphere on set when he’s around is stress-free. We share a unique relationship and an unconditional affection,” she added.

Ajay and Tabu will now be seen romancing each other after 23 years in a Luv Ranjan film. Meanwhile, their latest release De De Pyaar De received an average response at the box office. After an opening of Rs 10 crore, the film collected Rs 44 crore in four days. Tabu plays Ajay’s ex-wife in the film that stars Rakul Preet Singh as his girlfriend.