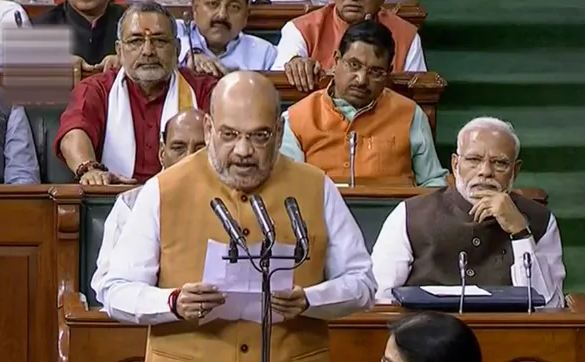 Union Home Minister Amit Shah will table the Jammu and Kashmir Reservation Amendment Bill in the Lok Sabha today. This will be the first legislative business of the BJP president in parliament after his election to the lower house and cabinet appointment following the party's decisive win in national polls last month.

After introducing the bill which had earlier been enforced as an ordinance, Amit Shah is also set to speak in the house about its importance.

On February 28, the union cabinet had approved 'The Jammu and Kashmir Reservation (Amendment) Ordinance, 2019' and it was cleared by President Ram Nath Kovind.

It provides for amendments in the Jammu and Kashmir Reservation Act, 2004 to bringing people living in the areas along the border within the ambit of reservation at par with people living in areas near the Actual Line of Control.

The bill is aimed at replacing the ordinance to provide 10 per cent reservation for economically weaker sections in Jammu and Kashmir.

This would pave the way for reserving state government jobs to the youth of Jammu and Kashmir who are from economically weaker sections belonging to any religion or caste.

The 10 per cent reservation for economically weaker sections was introduced in rest of the country through the 103rd Constitution Amendment in January 2019.

Amit Shah's legislative agenda is expected to be closely followed and his decision to start out with a bill related to Jammu and Kashmir is significant.

While campaigning for the Lok Sabha elections, the BJP leader had vowed to scrap Article 370 of the constitution that allows Jammu and Kashmir its own constitution, flag and the right to handle its own laws except on matters that impact national security.

In its election manifesto, the BJP had also repeated its intention of scrapping Article 35A, which defines permanent residents of the state and excludes outsiders from owning property and getting benefits including government jobs.

The scrapping of the two articles, an extremely sensitive subject in Jammu and Kashmir, has been a part of the BJP's core ideology, carried over since the days of Jan Sangh.